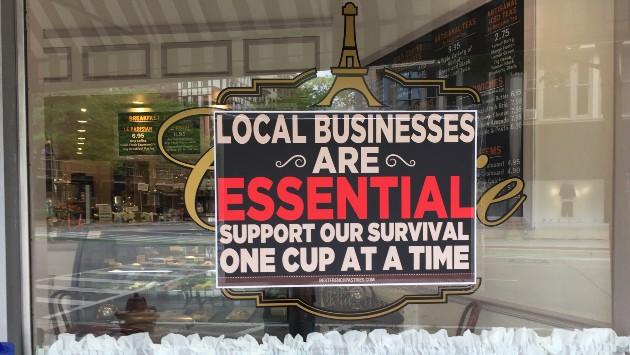 Some downtown Evanston merchants, who have just re-opened their stores after more than a two-month shutdown due to coronavirus, are concerned about outbreaks of looting in the city — though so far the targets have been limited to major chain stores.

Gigi Bottega, a women’s clothing boutique on Davis Street, opened its doors today, for the first time since mid-March.

Store manager Angelica D’Costa says things are “a little uncertain,” but she’s “hoping people will feel safe to come in and shop.”  That uncertainty  is due to coronavirus. Then there’s the uncertainty over vandalism.

D’Costa says she feels good about police protection in Evanston.  But she adds “I saw what happened in Chicago and other cities.  This is a small business.  It’s something else to worry about.”

A few doors down, at Patisserie Coralie French coffee shop, Justin Pierce, a barista, says the staff is “not quaking in our boots.” A bakery hardly seems like a target for vandals. Pierce is more concerned about getting to and from work. He lives in Chicago, where streets have been blocked and some protests have gotten out of hand.  Pierce says there’s “always that possibility” of running into trouble, so it’s necessary to “keep vigilant and try to stay safe.”

Update 5:25 p.m.: Koi Fine Asian Cuisine, on Davis Street, has suspended all deliveries into Chicago until it is safe to resume them.

A manager also says the restaurant is holding off on opening its large windows for indoor dining.

Under Governor J.B. Pritzker’s “Restore Illinois” plan, restaurants can now serve meals outdoors, as well as have carry out and delivery. Indoor dining room service is still prohibited, with one exception.

Restaurants with floor to ceiling shuttered windows can seat patrons inside next to those windows, as long as the windows are open and the customers are within eight feet of that opening.

Koi has such windows. However, the manager says opening them for customers is a “day to day” decision based on safety.

Getting from Evanston to Chicago can be a problem.  Protesters have been blocking streets.  All Metra service was cancelled for today. CTA trains, which were cancelled last evening, resumed this morning at six. But they are not entering the downtown core.

A CTA Purple Line train heading to Chicago today from the Davis Street station in Evanston.

Purple Line expresses, which serve Evanston, are only going as far as Belmont instead of the Loop. And Red Line trains are stopping at Belmont as well.  Pace has restored most bus service, but not to downtown Chicago.  Pace suspended service last evening, but as with the CTA, started up again at 6 AM.

At this point coronavirus has had far more impact on Evanston merchants than has vandalism. Pierce, the barista, filed for unemployment after Patisserie Coralie temporarily closed in March.  He says he still has not received anything.

So right now, it seems Evanston merchants are worried more about making it through Phase 3 of the state’s reopening than they are about Chicago-style looting coming here. Evanston looks and feels safe. Yesterday’s peaceful protest rally in town showed frustration, anger,and concern over George Floyd’s death.  However, there was no violence.

But this morning, an employee at the Walgreens on Green Bay, where looting occurred Sunday, looked at the space where the window had been broken out, sighed, and said “It’s sad.”