Angry verbal exchanges broke out at Wednesday's Plan Commission meeting after an opponent of the proposed 14-story 1890 Maple Ave. project claimed that neighbors who testified in favor of the plan were in the pay of the developer.

A rendering looking north on Maple. The proposed new buildingÂ is on the left with the red awnings.Â

"That's a lie, I'll get a lawyer and sue you," architect Stephen Yas of 1889 Maple Ave. shouted after Robert Taylor of 1026 Garnett Place claimed that Mr. Yas worked for developer Robert King.

"Keep raising my name and I'll have my lawyer on you," added Leon Robinson of 1317 Lyons.

Mr. Taylor said the proposed building is too big and would cast shadows on his home and rental properties he owns on Garnett. But he said he feared that the prospect of additional tax revenue would blind the Plan Commission and City Council to the project's failings.

Commissioner Alice Rebechini said, "I don't appreciate remarks that insinuate our decisions are based on money. We give years of service to this board and very careful consideration to all points of view."

And Alderman Lionel Jean-Baptiste, in whose 2nd Ward the project is located, strode to the podium and said, "These accusations made tonight about individuals being on the developer's payroll because they made favorable comments are unfair. They ought to be corrected on the record."

"The City Council is burdened with tremendous responsibility, it must make its decisions for the best interest of the city," Ald. Jean-Baptiste added, "It has nothing to do with money."

Mr. Taylor and other opponents were repeatedly ruled out of order by Commission Vice-Chair Stuart Opdycke when they tried to tie discussion of the 1890 Maple project to their claims that the city had provided inadequate public notice to neighbors about the adjacent 18-story, 1881 Oak Ave. project from the same developer that won city approval last year. 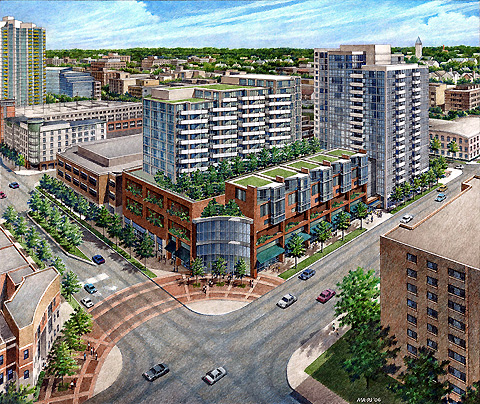 The current proposal from Carroll Properties calls for a 158-foot tall building with 152 rental dwelling units and 40,000 square feet of retail space.

The project would have 313 enclosed parking spaces, with about 40 of those provided under an existing lease agreement at the city's Maple Avenue garage.

The developer's attorney, David Reifman, said the only variation the developer is seeking is for additional height. He said the proposed density is allowed under existing zoning.

By building higher the design provides substantial setbacks for the tower from the street and creates room for roof-top gardens on the mid-rise portion of the building.

Neighbors who favor the project note that it would replace a vacant three-story office building that they say creates a dark and unsafe environment in the area at night.

While opponents said they feared traffic congestion as a result of the project, city traffic engineers and the developer's traffic consultant said traffic conditions could be improved to be better than they are today with several steps including installing new traffic signals and eliminating parking on the south side of Emerson Street to permit four lanes off traffic.

The hearing on the project is scheduled to continue on March 14.

A hearing on a proposal to build a new headquarters for the Methodist Pension Board at 1200 Davis St. was postponed at the pension board's request until the commission's April 11 meeting.