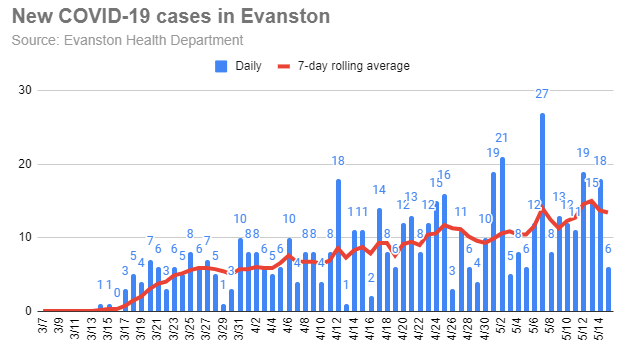 Evanston reported its lowest count of new COVID-19 cases in more than a week today, with six new cases bringing the city’s total to 538.

The northeast region of the state remained on track for a potential advance on May 29 to Phase 3 of the governor’s Restore Illinois reopening plan with a positive test result rate of 19.4% and all other metrics within the established standards.

The state reported results of 26,025 tests today with a positive test results rate of 9.3%.

That was the second highest number of daily tests and the lowest positive results rate since late March.

At his news conference this afternoon, Gov. J.B. Pritzker said the state was making major strides with testing, but he declined to provide a specific number of tests that he believed would meet his expectations for moving to Phase 4 of his reopening plan which says testing would need to be available “regardless of symptoms or risk factors.”