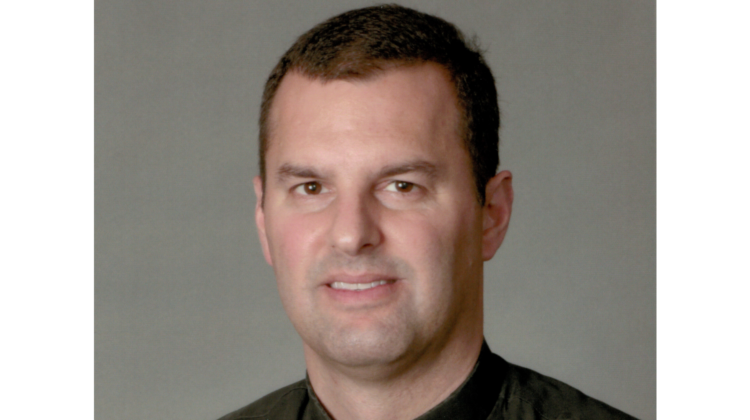 Loyola Academy’s Board of Trustees has named the Rev. Gregory J. Ostdiek, SJ, to be the school’s ninth president, effective July 5, 2022.

He will succeed the Rev. Patrick E. McGrath, SJ, Loyola’s president for the past 12 years. McGrath will become pastor of Old St. Patrick’s Church in Chicago next summer.

The Wilmette school is the largest Jesuit high school in the United States, enrolling about 2,000 students from all over the Chicago metro area, including Evanston.

“Father Greg Ostdiek truly embraces the Jesuit, Catholic mission not only through his personal lived experience, but also in his vocation as a Jesuit priest,” said Loyola Board Chair Nancy Paridy of Evanston. “He is a leader who cares deeply about the people he serves.”

Loyola “has thrived under the leadership of Father McGrath,” Paridy added.

McGrath led the Academy’s $75 million Second Century Campaign, the largest and most successful capital campaign in the school’s history, which is expected to exceed its goal by the end of the school year.

Large-scale capital enhancements include the John D. Norcross ’54 Aquatic Center and the Mary and L. Robert ’62 Pasquesi Piazza, which opened in 2019, and Loyola’s new Center for the Performing Arts, home of the Leemputte Family Theater, which will open in August 2022. Under his leadership, $51.9 million in tuition assistance has been awarded to 6,759 Loyola students, and he has conferred 6,463 diplomas to graduating seniors.

Loyola’s next president is a native of Dayton, Ohio, where he graduated from Carroll High School in 1988. He holds bachelor’s degrees from the University of Dayton in mechanical engineering and English and master’s degrees in English from Pennsylvania State University, in philosophy from Fordham University, in theology from Boston College, and in educational policy and management and in public administration from Harvard University.

Father Ostdiek joined the Jesuits in 2008, teaching physics, coaching athletics, serving in campus ministry and moderating student clubs at several Jesuit schools, including at Loyola Academy from 2014 to 2016.

He was ordained in 2019. He has served as a parish priest and a prison minister. Currently, he serves as an administrator at Brebeuf Jesuit Preparatory School in Indianapolis and on the boards of Loyola Academy and St. Xavier High School in Cincinnati.

Prior to joining the Jesuits, Father Ostdiek served in the United States Navy from 1996 to 2008. He served as a navigation instructor; a reactor training assistant on the USS John C. Stennis, responsible for the training of a 450-person department on the nuclear power plant; an executive officer and navigator on the USS Dextrous, second in command overseeing an 80-person crew, which was deployed twice in the Arabian Gulf.

“Through this experience, he came to learn what makes for effective leadership,” Paridy said, “and he sees the keys to Christian leadership as leading from love, getting people on board and having them aligned with a shared mission.”