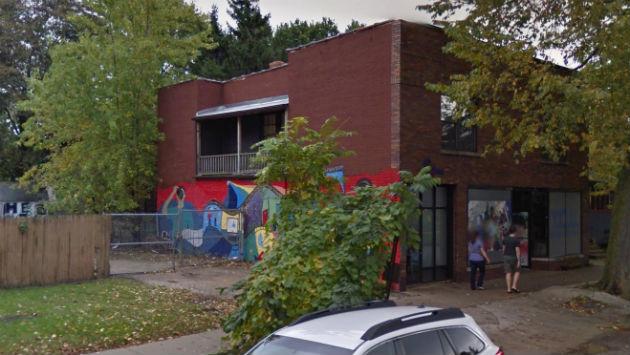 Evanston Lumber is seeking city approval to expand its offices into the former Youth & Opportunity United building at 1027 Sherman Ave.

The 42-foot wide by 252-foot deep lot includes two disparate structures — a 1920s vintage brick, two-story, flat-roofed storefront built to the front property line which is attached at its rear to a frame, two-story, gable-roofed house that appears to be considerably older.

The block, across from Nichols School, includes mostly Victorian-era homes and small apartment buildings, but there’s another storefront-like building a bit north at 1037 Sherman. The lot is split between two zoning districts, with the west half in the R3 two-family residential district and the east half in the MUE Transitional Manufacturing-Employment district.

When Y.O.U. first leased the property in 1991, before buying it in 2006, the city granted a zoning variation that limited the permitted use of the building to “youth counseling offices and ancillary uses thereto” — which means the new proposed use has to go through the process of seeking a new zoning variation for use as offices for the lumber yard.

In addition, lumber yard owner Robert Fisher is seeking permission to build a new exit stairs from the second floor on the north side of the building, replacing a decaying one on the south side of the structure, which requires another variation.

Fisher, who owns several other properties on the block facing Sherman Avenue and whose lumber storage yard is also on the block, says he plans to do extensive interior work on the property and that it would provide office space for 10 to 12 employees as well as providing “non-retail display space” in the storefronts.

The proposal is scheduled to be reviewed by the city’s Design and Project Review Committee on Wednesday, June 7. It will then move on to the city’s Zoning Board of Appeals.

Y.O.U. sold the Sherman Avenue building to Evanston Lumber last December and has since moved to new offices at 1911 Church St.