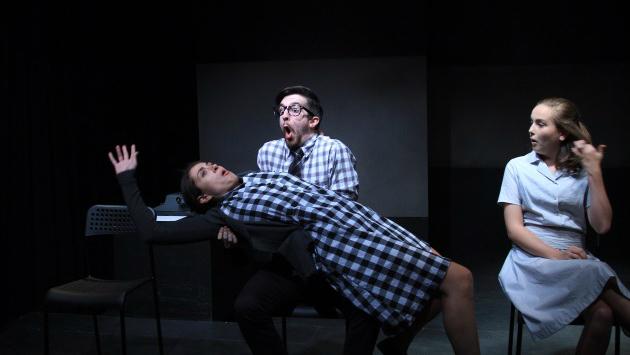 This year’s fifteenth anniversary season at Piccolo Theatre opens with “The Outfit,” a play by Laura Schellhardt that has garnered attention in the past from Evanston area folks as well as the Jeff Committee.

“The Outfit” is a “reworked” version of Nikolai Gogol’s “The Overcoat,” though director Tony Lawry believes it has less to do with the original than it does with its own new magic. “Well first off, this is not an adaptation,” Lawry said, “because the story and characters are totally different.”

The production draws very lightly from the Gogol classic, with plenty of new inspiration from magical realism and small-scale spectacle. “Our play focuses on the often ridiculous demands placed on young women in contemporary society- and on the standards of physical beauty they are held to that are not the same for men,” says playwright Laura Schellhardt. “So while the conceit is similar to Gogol's, the thematic resonance is different.”

Shadow puppets, live sound effects, and other design elements connect to create a living fairytale inspired by magical realism. The tale centers on Nora, a comi-tragic heroine literally stuck in a shadowy world.

Design was “inspired by the idea that Nora lives in the shadows of her reality” according to Lawry, and so “The Outfit” begins in black and white. The play develops a magical and colorful feel when friend Marco introduces a new ensemble to Nora’s life, inspiring confidence and adventure.

Laura Schellhardt, in charge of the playwriting initiative at Northwestern, wrote this loose adaptation for the Cherubs. It was produced by Serendipity Theatre in 2004, where it was nominated for a Jeff Award for Best New Adaptation.

Since, Schellhardt has made a few adjustments to the script. “For this story, I spent a lot of time studying the dynamic of traditional Italian families, Italian folklore and, obviously, the world of fashion design, before beginning the play itself,” Schellhardt said. “I envisioned this as a modern-day folktale. It's not realism — it's heightened, the pace is faster, the color — when there is color — is more vibrant, the characters are mercurial and larger than life without being cartoonish."

"The play invites theatricality and spectacle," Schellhardt said, "so while I don't specifically ask for puppets, I certainly embrace that choice. I think Tony was wise to make it, and I look forward to seeing the finished product.”