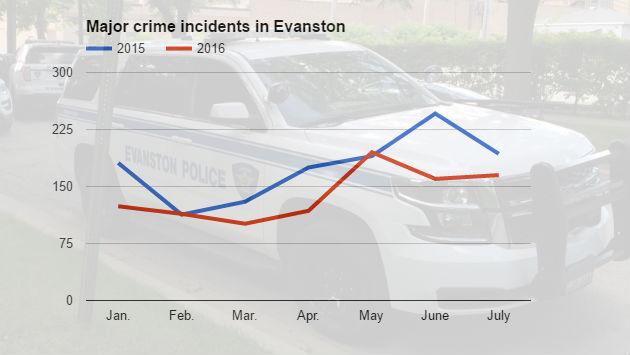 Evanston police today reported that the rate of major crime in the city is down 20 percent so far this year compared with the same period in 2015.

Of the eight crime categories included in federal crime statistics, the most common one — theft — had the biggest absolute decline. Thefts through the end of July this year totalled 687, compared to 919 last year.

Large percentage declines also were recorded in robberies and aggravated batteries and assaults.

Burglaries and motor vehicle thefts showed drops of around 2 percent.

But the three least-frequent crimes — murder, rape and arson all showed increases for the year so far. There've been two murders, compared to one at this point last year, two criminal sexual assaults, compared to none in the same period of 2015 and five arson incidents, compared to three last year.

The crime decline has been uneven from month to month — with five of the seven months showing declines over the same month a year ago — and two showing small increases.