A man implicated in a string of laundry room burglaries is back in custody. 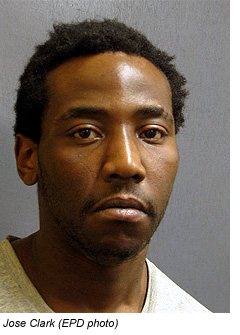 Evanston police say 27-year-old Jose Clark Jr., was arrested Thursday by officers who spotted him near the Tasty Sub restaurant at 2001 W. Howard in Chicago.

He’s now been charged with felony counts of burglary and theft from a coin operated machine in connection with a laundry-room burglary on Dec. 21, 2007, at an apartment building in the 800 block of Oakton St.

Clark was arrested just over a year ago on charges of breaking into other laundry rooms in Evanston.

He reportedly was convicted and served five months of a six year sentence before being released on parole in November.

Evanston Police Chief Richard Eddington says Clark had eight bags of quarters in his possession when he was arrested Thursday.