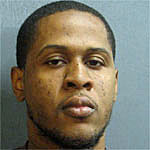 A 26-year-old Evanston man was ordered held without bond today, charged with the murder last month of another man outside a local auto repair shop.

A female passenger in Davis’ car escaped injury in the attack.

Bamberg’s next hearing in Skokie district court is scheduled for Friday.

Update 5:50 p.m.: Police Chief Richard Eddington says it appears the shooting was the outgrowth of a long-standing dispute among families in the community that may date back at least to a fatal shooting incident at The Keg five years ago.