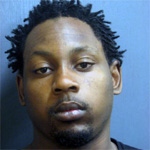 A 23-year-old Evanston man has been charged with firing shots at a Chevy Blazer near Simpson Street and Darrow Avenue last week.

Police Cmdr. Jay Parrott says James W. Johnson of 2046 Darrow pulled out a gun and fired several shots at the vehicle about 4:10 p.m. Wednesday after one of the Hispanic males in the car shouted something at him as he walked down the street.

Although the people in the car never came forward, Parrott says, police located two witnesses who observed the incident — includine one — a college police intern — who was able to identify Johnson as the man who fired the shots.

Parrott says Johnson provided a statement admitting his involvement in the shooting.

Police are still looking for the handgun used in the incident, a .380 caliber semi-automatic.

.Johnson, now facing felony charges of aggravated discharge of a firearm at an occupied vehicle, is scheduled to appear at 9 a.m. on May 10 in Skokie district court.