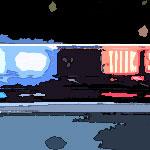 Evanston police say a motorcyclist has died after he lost control while traveling at a high rate of speed on northbound Sheridan Road near Calvary Cemetery.

The victim, who reportedly suffered a severed leg in the crash, was taken to St. Francis Hospital where he was later pronounced dead.

Evanston police and the regional Major Crash Assistance Team are investigating the crash.

As of 10 a.m., Sheridan Road was still shut down between South Boulevard and the Chicago border at Juneway Terrace.

Update 12:50 p.m.: Police say the motorcyclist wasn't carrying identification, and they expect to have to use fingerprints to determine who he was.