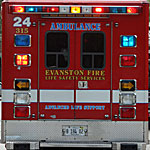 A man was struck by a Metra train at the Central Street station in Evanston Sunday evening.

An Evanston Now reader reports the man was stuck about 8 p.m. and was removed from under the rear of the second car of the southbound train and taken away on a stretcher about 8:15 p.m.

The Chicago Tribune quotes fire officials as saying the victim was taken to Evanston Hospital with injuries that did not appear to be life-threatening.

The train was enroute from Kenosha, Wis., to downtown Chicago and had been scheduled to arrive there about 8:28 p.m.