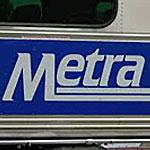 A 45-year-old homeless man was struck and killed by a Metra train just south of Main Street in Evanston early this morning.

Evanston Police Cmdr. Jay Parrott says the man was struck by an outbound train about 1:10 a.m.

Evanston Fire Division Chief Dwight Hohl says the man had laid down on the tracks in a fetal position, so the train operator didn't see him until the last moment and was unable to stop the train.

The victim was pronounced dead at the scene about a half hour later.

The Chicago Tribune quotes a medical examiner's office spokesman as saying the man had no permanent address.

His name hasn't yet been released.