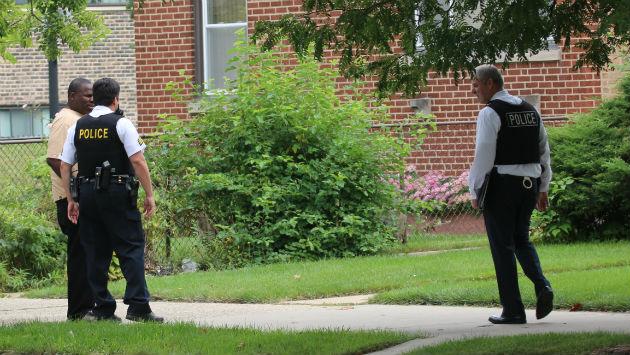 Police say two men in their late teens or early 20s were seen fleeing from the scene.

An ambulance has just arrived on the scene to transport the shooting victim to the hospital. He reportedly was hit in the right arm.

Update 10:40 a.m.: Police have blocked traffic in both directions on Dodge Avenue between Lee and Greenleaf streets as they investigate the incident.

Update 10:50 a,m.: Southbound Dodge has been reopened to traffic. The shooting victim is being transported to Evanston Hospital.

Update 11:10 a.m.: Dodge is now reported back open to traffic in both directions.

Update 12:15 p.m.: Police say the shooting victim is a 23-year-old Evanston resident and that he's now listed in good condition at the hospital.

Initial reports suggested the shooting victim may have walked in on a burglary in progress, but Polinski says it now appears some other circumstances triggered the shooting. Detectives are still trying to sort that out.

Update 4:40 p.m.: Police now say the shooting victime is not cooperating with police efforts to hold the individuals responsible for the shooting accountable. Additionally, while a motive is unclear at this point in time, investigators believe this was not a random act.

Anyone with information is asked to call the Evanston Police Department at 847-866-5000 or by using Text-A-Tip atCRIMES (274637) and entering EPDTIP in the message line with the tip information.