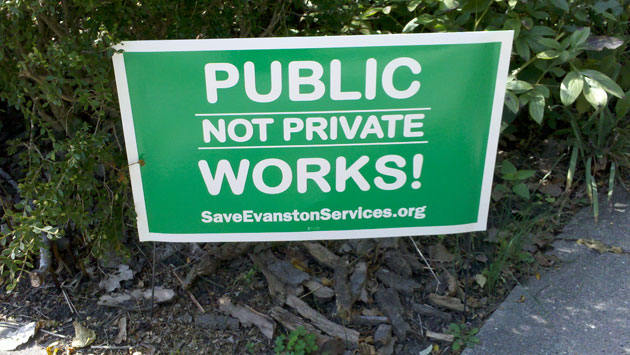 Evanston's City Manager this evening unveiled a proposed 2012 city budget in which he calls for a nearly 8 percent increase in property taxes.

That compares to a property tax increase of just over 3 percent in the current year's budget.

Beyond the property tax hike, Manager Wally Bobkiewicz's budget calls for extracting another $2.2 million in new revenue from city residents by raising parking fines, increasing recreation program fees and increasing the library tax, among other measures.

The spending plan calls for cutting the city's workforce of nearly 800 employees by a little over 1 percent, with the biggest reduction the loss of five forestry workers whose jobs would be contracted out.

That would be the smallest staffing reduction in several years. The size of the city's workforce peaked at 884 workers in 2006-7.

The budget assumes that city workers will receive a 2 percent cost of living increase in contracts being negotiated this fall.

The proposed property tax hike would have been even larger, but for a change adopted by the state legislature this year that reduced pension benefits for newly hired police and fire employees.

Those changes cut a projected tax increase for those programs from roughly $2 million to less than $1 million.

Overall spending of $218 million in the proposed budget is up 11 percent from the city's last 12-month spending plan adopted nearly two years ago. The city is operating on a 10 month budget this year as it transitions to make its fiscal year match the calendar year.

Top: Demands from union workers, as seen on this yard sign, that the city not farm out jobs to private contractors, appear to have been largely — if not completely — met in the manager's proposed budget.