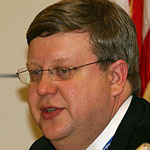 In a message posted on the city website, Bobkiewicz says he believes the city has cut about as much as it can from existing programs and still deliver those services with high quality. But it still faces multi-million dollar budget shortfalls on into the future.

He suggests that the city needs to narrow its focus and "look to others to provide" some services where that could be done more cost-effectively.

He says any further tax hikes would increase the "flight of residents and businesses from Evanston" and that keeping and enhancing the city's business and residential mix is critical to the community's future.

Bobkiewicz says he hopes to begin a community discussion about the review process next month and complete the review in time to submit next year's proposed budget to the City Council on schedule in early October.

Despite published reports that the city plans to close three north side recreation facilities — the Ecology Center, Chandler-Newberger Center, and the Noyes Cultural Arts Center — Bobkiewicz says no decisions have been made about specific programs or facilities to close or reduce.