Bobkiewicz, at a community meeting Thursday night, said he'd been trying to reach ComEd officials four times a day since the storm, "and they only started returning our calls today, when there was a coference call with local government officials."

ComEd "is a state regulated utility," Bobkiewicz added, "and they've gone to the legislature to raise rates for 10 consecutive years."

"This city is not in favor of their performance," he said. "All of us need to put pressure on the legislature, to say this is a public utility and it needs to behave like one." 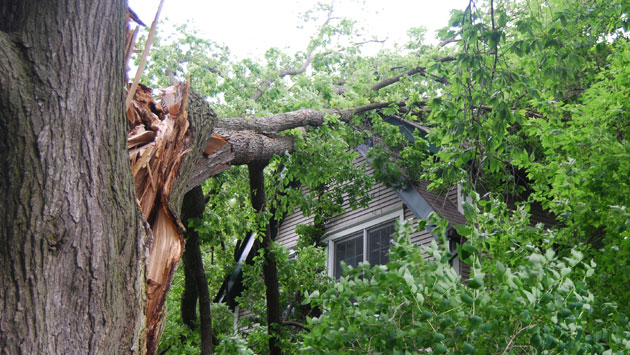 A tree limb rests against a home in the Penny Park neighborhood of Evanston. (Photo by Peter Wallis).

Meanwhile power was restored to a substantial number of homes in southeast Evanston overnight, but several hundred customers scattered around the city remain without power, as shown on an updated map provided by city officials.

Bobkiewicz says he's been told that ComEd continues to work toward a goal of having power restored to all customers by midnight tonight.