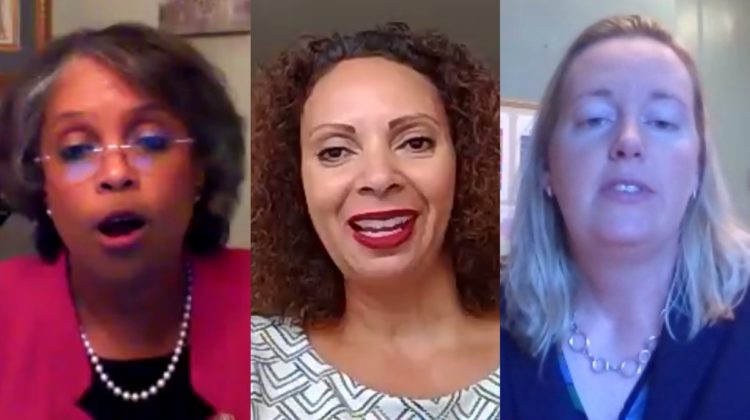 The three finalists to be Evanston’s next city manager responded to nine questions posed by the head of the consulting firm who screened prospects for the job during an online forum Wednesday evening.

The session, with no chance for residents to pose questions directly and no opportunity for follow ups, gave little indication of how the candidates might respond under the pressure of sometimes hostile questioning from the public if they get the job.

Maria Peoples, currently deputy county manager for Coconino County, Arizona, came across as the most polished speaker during the session, while interim city manager Erika Storlie was able to demonstrate the deepest understanding of the details of Evanston issues.

All three candidates expressed support for rethinking the delivery of some public safety services, but none embraced a radical defunding of the police department.

On the issue of addressing structural racism, Storlie stressed the efforts the city has already made in adopting a reparations program.

On dealing with city budget challenges, Storlie described her efforts to close Evanston’s $12 million revenue shortfall this year and the projected $8 million shortfall in the 2021 budget she will unveil on Friday.

Ferrell-Benevides said Petersburg was facing an even deeper deficit when she was appointed three years ago — a $20 million revenue shortfall and a negative $7 million fund balance.

With no city worker unions in Petersburg, she was able to persuade police and fire employees to take a 10% pay cut. She said she’s turned the city’s finances around to where it now has a $8 million fund balance — $15 million better than three years ago.

Peoples, who isn’t the top official in charge of Coconino County’s budget, said the only way out of a structural deficit is to bring in additional revenue. She said she’d worked out arrangements to have employees voluntarily reduce their hours, suggesting that employees with increased family responsibilities during the COVID-19 pandemic appreciated that option.

Peoples and Ferrell-Benevides said their biggest challenge if selected would involve getting to know the community, while Storlie said hers would be to balance the competing priorities of the different interest groups in town.

The City Council will hold an executive session meeting at 1 p.m. this afternoon at which the Council is expected to decide on its first choice for the manager’s job and direct the consulting firm to negotiate a contract with that person.

The new manager’s contract is expected to be approved at a special Council meeting on Oct. 19.