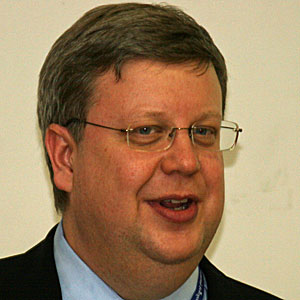 City employee unions, fearing a major outsourcing push, have been running ads opposing the concept in a local newspaper.

Bobkiewicz, who has said the city needs to close a several million dollar gap in its budget, said, "because of the quality of life expectations people have in Evanston, there are not a whole lot of opportunities to contract out services."

He suggested that retaining a sizable staff of public works employees in house gives the city the ability to respond more quickly and aggressively to emergency situations, like this winter's blizzard and this summer's windstorms.

He said the switch the city made recently — increasing the share of its sanitation operation handled by contractors — made sense.

"But as far as other large-scale contracting opportunities," he added, "We're finding it is probably not going to make financial or service-quality sense."

When there's a blizzard, Bobkiewicz added, you don't want to hear that a contractor "couldn't get its crews past I-294 to help dig us out."

He said he may propose to contract out some activities on a smaller scale, "but you'll not see any proposals for large-scale contracting out with the budget we're going to present" in early October.

Bobkiewicz said with the city budget strained, outsourcing "is the kind of thing you can't ignore, if tax dollars are going to be spent responsibly. You put everything on the table to look at, and some things stick, while others don't."

Alderman Judy Fiske, 1st Ward, said she supported the switch to have Groot Industries pick up garbage in the city while city crews switched to picking up recycling, "but I'm not interested at all in outsourcing all of our sanitation workers."

She recounted riding with a snow-plow driver during the blizzard. "Those guys are really great," she said, "I told them, 'you're the best ambassadors for the City of Evanston.'"