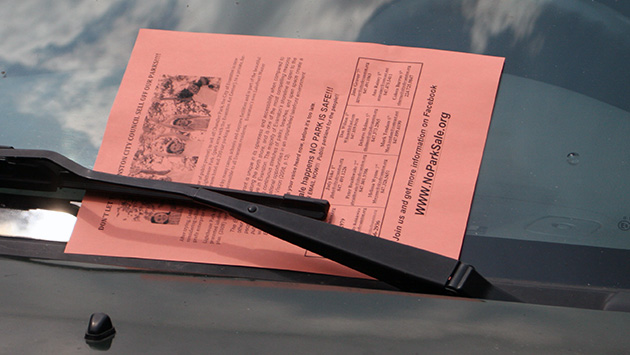 Opponents of the proposed sale of the Harley Clarke mansion and its conversion to a boutique hotel took their message to the 4th of July parade Thursday, sticking fliers on windshields and light poles and even adding it to a parade float. 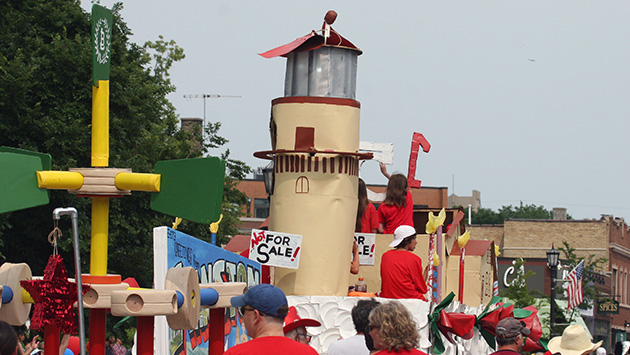 Top: One of numerous fliers on car windshields along Prairie Avenue near the parade route. Above: The Backlot Association's parade float with "Not For Sale" signs on the lighthouse and mansion.

City officials, while seeking proposals for purchase of the mansion, have insisted that they have no intention of selling off the beach.

Organizers of the protest, including Barbara Janes, Lou Harms and Mary Rosinski, call the mansion and surrounding land a public treasure that once lost would be gone forever.

The city has leased the property for decades to the Evanston Art Center for $1 a year — under an agreement that has resulted in accumulating deferred maintenance by both parties that Mayor Elizabeth Tisdahl says the city has no money to fix.

The only remaining bidder for the property, billionaire Col. James N. Pritzker, has proposed spending $22 million to restore the property, building an addition to accommodate a 57-room boutique hotel, a 200 car underground garage and a restaurant that would be open to people using the public beach.