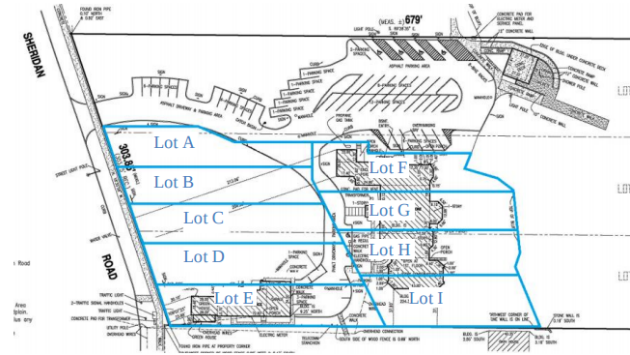 City staff told members of the Harley Clark Committee Wednesday night that if the mansion building were torn down, the Evanston lakefront property potentially could be redeveloped for as many as nine single family homes while still maintaining public ownership of the beach and parking area.

If the mansion at 2603 Sheridan Road were retained, the property could instead be subdivided into as many as six lots — including the mansion, the coach house and four new single family homes, the staff memo said. All of the lots would meet the city’s minimum lot size requirement of 7,200 square feet under the R-1 zoning that now surrounds the mansion property.

The staff report didn’t attempt to estimate a value for the subdivision, but public records show that North Shore Builders paid $3.25 million to purchase nine similar-sized lots at the former Kendall College site, three blocks southwest of the mansion, two years ago.

They’ve now sold newly constructed homes on several of those lots for between $1.26 million and $1.49 million each. At those prices, a nine-home subdivision could generate as much as $250,000 a year in property tax revenue for local taxing bodies.

The committee briefly discussed the possibility of the city turning over the mansion property to the Lighthouse Park District, whose boundaries run from the lakefront west to the North Shore Channel and from Noyes Street north to Isabella Street.

That district, which has maintaining the Gross Point lighthouse as its primary responsiblity, won voter approval this month by a 7-3 margin to increase its tax levy by about 13 percent, to an average of roughly $125 per household.

But its overall budget is still quite small — about $90,000 a year, committee chair Steve Hagerty said — and it’s unclear whether voters in the district would be willing to take on the cost of maintaining the mansion.

The committee was also told by city staff that a “ballpark estimate” for demolishing he mansion would be perhaps $120,000 — in addition to about $60,000 to prepare the property for demolition.

Restoring the site for use as parkland would be an additional, unspecified cost.

The committee voted to schedule a charette or workshop session for public comment on Monday, May 18, and decided that the available options could be grouped into three clusters for discussion at that meeting:

The workshop session would be accompanied by options for residents to provide feedback online.

After that, the committee would reconvene to prepare its final recommendations — which are scheduled for presentation to the City Council on June 8.