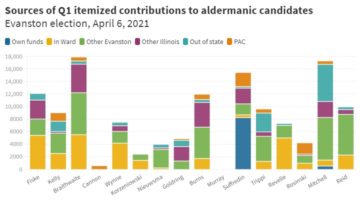 Candidates in this month’s Evanston aldermanic election on average raised only a quarter of their contributions during the first three months of the year from people who could vote for them.

But in five out of eight contested races, the candidate who raised a higher percentage of their funds from their constituents ended up winning the election.

First quarter campaign finance reports were required to be filed with the Illinois State Board of Elections last week.

Getting a high percentage of contributions from out of state sources turned out to be a marker for defeat. Three of the four candidates with the highest proportion of out-of-state contributions lost their races.

The vast majority of candidates did not report contributing their own funds to their campaigns. Alderman Tom Suffredin, 6th Ward, was the big exception there, giving his campaign $8,225. Matthew Mitchell kicked in $500 to his losing 8th Ward race during the quarter. It doesn’t show up in these charts, but Alderman Melissa Wynne, 3rd Ward, took a different approach, making a $5,000 loan to her campaign.

On average candidates raise just over a third of their money outside their ward but from people with Evanston addresses, about 14 percent from other Illinois residents, 10 percent from out of state residents and 13% from political action committees.

Wherever the money came from, it helped to have more of it than your opponent. The chart above shows both itemized and non-itemized contributions to the candidates during the first quarter of the year.

And in six races out of eight the candidate who raised more overall during the period ended up the winner.

Winners were bigger spenders in most aldermanic races (4/20/21)