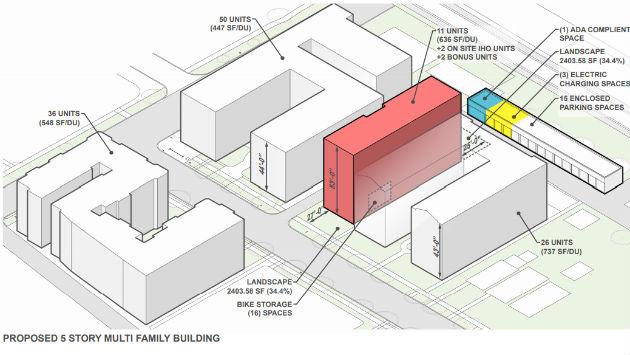 Developer Paul Harb will return to the Zoning Board of Appeals Tuesday night armed with letters of support from owners of neighboring apartment buildings for his plan to replace a two-family rental house at 2211 Maple Ave. with a five-story apartment building.

The project has previously drawn opposition from some owners of nearby single-family homes and townhouses.

Harb has submitted a letter from Kevin Miller, vice president of business affairs at Garrett Theological Seminary, which owns the buildings at 2215 and 2207 Maple, on either side of the proposed development, in which Miller says the project is “very well conceived” and “will bring much-needed improvements to the neighborhood and will provide some sorely missing affordable housing in the area.”

In another letter, David Maeir, the property manager for the building across the street at 2210 Maple Ave. managed by Parliament Enterprises, says the project “will bring improvements to the neighborhood.”

And Gregory DeStefano, manager of the recently completed 828 Lofts development across the CTA tracks at 824-828 Noyes St., wrtes that he believes the new building “will be a dramatic improvement over the existing condition” of the property and “an enhancement to the overall neighborhood.”

The single-family home owners continue to voice opposition, with Marc Beem and Susan Berkowitz of 2128 Maple Ave. writing that the proposed building “is not consistent with the single and two family homes that characterize much of the 2000-2200 blocks of Maple.”

John Blades of 2111 Maple Ave. writes that the new development would be “a large and ominous step in the wrong direction, aimed at further transforming the community into a student ghetto, with taller apartments that will warehouse more students.”