A mix up on fliers left dozens of neighbors of a planned 14-story building at 1890 Maple Ave. flaming mad at aÂ  community meeting at the Evanston Civic Center this evening. 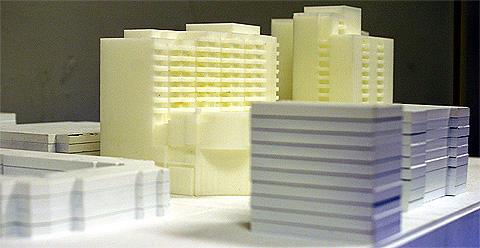 A model shows the proposed 14-story 1890 Maple Ave. building at center and to the right the already-approved 18-story Carroll Place development from the same developer. In front of theÂ planned buildings are, from left, the Ivy Cort townhouses,Â Northwestern University's 10-story graduate dormitory and the nine-story Primm Towers senior citizen building.

City officials forgot to include the address of the proposed building on notices sent to neighbors, and many neighbors said they never got the notices. Others said when they called the city to learn the building's address or get answers to other questions, their calls were never returned.

That left 2nd Ward Alderman Lionel Jean-Baptiste, who hosted the meeting, and Community Development Director James Wolinski, whose office sent out the notices, on the hot seat, perhaps even more so than developer Robert King, whose project the neighbors wanted to oppose.

Mr. Wolinski apologized for the errors on the notice, and Ald. Jean-Baptiste scheduled a follow-up meeting for Feb. 1 with extra efforts to be made to get the word out for the second session.

Maureen Posner was one of several residents of the 28-story Optima Views condo development at 1720 Maple Ave., about a block south of the new site who said notice of the meeting was inadequate.

William Lee of 1720 Maple Ave. complained that traffic is already too heavy — especially in the evenings when the movie theaters are letting out. He said the area is turning into a concrete jungle like Hong Kong with huge buildings.

And Stamata Blanas of 1720 Maple Ave. voiced fears that the new building would lead to flooding in the neighborhood, although Assistant City Manager Judy Aiello said extensive work had been done when the Research Park area was developed to provide underground storm water holding areas to eliminate flooding problems.

Ms. Posner argued that the site is part of a transitional area — not really downtown — and should have lower height limits.

But former 1st Ward Alderman Art Newman, now a consultant to the developer, said the Optima Views developmentÂ  is in the same zoning district as the 1890 Maple site and is nearly twice as tall.

Robert Taylor of 1126 Garnett Place, a block north of the site, saidÂ  traffic in the area is already too heavy, especially at rush hour. He said the proposed building represents a trend in which Evanston's central business district is shifting west and northwest encroaching on a residential neighborhood.

But some neighbors spoke in favor of the development.

Architect Stephen Yas, who designed the Ivy Court townhouses at 1889 Maple Ave., said he lives in a unit there that faces the 1890 Maple Ave. site.

"I think this new building will be a great asset to the neighborhood compared to the existing office building," Mr. Yas said.

He said the retail shops planned for the ground level of the new building will create a much more safe and secure environment.

He said he likes the plan to have the building just five stories tall at the front and having the tower set back several dozen feet.

"When you're driving on the street or walking, the tower won't even be apparent," Mr. Yas said.

In response to a question, Mr. King said he plans to retain ownership of the project and rent out the apartments for between $1.50 and $2 per square foot per month.

He said 60 percent of the apartments will be one-bedroom units, with the rest a mix of two and threeÂ bedroom units.

With the apartments averaging about 900 square feet, that would suggest an average monthly rent between $1,350 and $1,800. 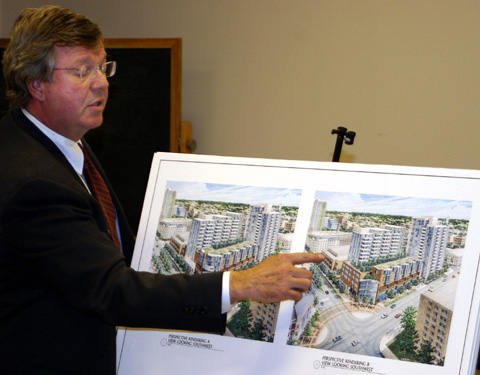 "This development is going to do exactly what we think the city wants it to do — revitalize a long-neglected area and increase the tax base," Mr. King said, "It will be a boon to the city, certainly better than the vacant office building there now."

After the second community meeting Feb. 1, the Evanston Plan Commission is tentatively scheduled to begin its hearings on the project Feb. 14.

The project will then move to the City Council's Planning and Development Committee and to the full City Council for a final decision.