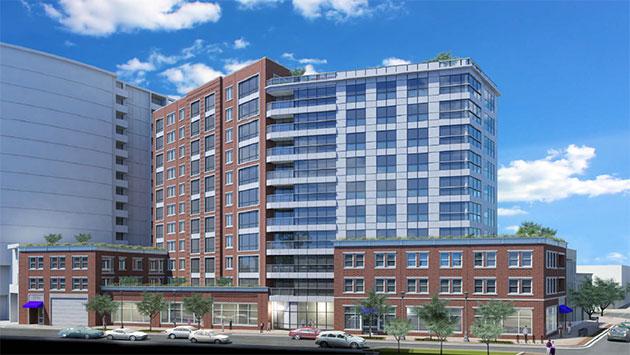 A planned mixed use development at 1571 Maple Ave. will gain an extra story, but be set back more from an adjoining high rise, as a result of a vote by a city staff committee this week.

During a lengthy session of the Site Plan and Appearance Review Committee on Wednesday, neighbors who live in the adjacent tower at 1570 Elmwood Ave. complained that the new building would be too close to north-facing units in their building.

The developers of the proposed new building had proposed a 12-foot setback for their tower, but agreed to increase that to 25 feet, in return for increasing the height of the building from 11 to 12 stories.

Community Development Director Mark Muenzer says that, with that revision, the committee voted to recommend the project for approval by the Plan Commission, which is expected to review the proposal at its next meeting on Wednesday, Oct. 8, subject to staff review of revised drawings for the windows that would face the existing building.

The neighbors had also objected the the fenestration on that wall — arguing there were so few windows it would feel like they were facing a blank wall.

The existing condo building, built as the Winthrop Club and more recently referred to as One Evanston, is built to the lot line at its parking garage base, but the apartment floors above are set back 25 feet from the lot line — which matches the revised setback planned for the new building. 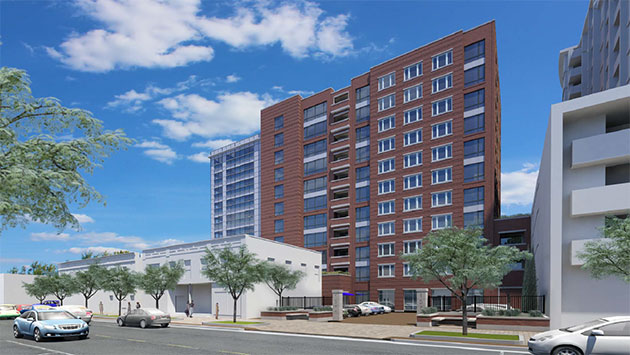 A rendering looking east from Maple Avenue, showing the 13 parking spaces at the site.

An unusal feature of the new planned development is that, while it will have 101 residential units, it plans to provide only 13 parking spaces on the site — and those would be available for shoppers at nearby retail businesses during the day.

In addition, the developers plan to lease 101 parking spaces in the city's underutilized Maple Avenue parking garage two blocks to the north. At current monthly rates, that could generate more than $100,000 a year in additional parking revenue to the city.

The developers are also asking for development allowances to increase the permitted number of dwelling units units from 73 to 101 and increasing the floor area ratio from 4.5 to 5.02.

And because of the irregular shape of the site, the developer is also asking to reduce the setback of the building's upper floors from the lot lines.

Note: The renderings shown here, and presented at the SPARC meeting, show the building as originally proposed — and don't reflect the changes recommended by the committee.