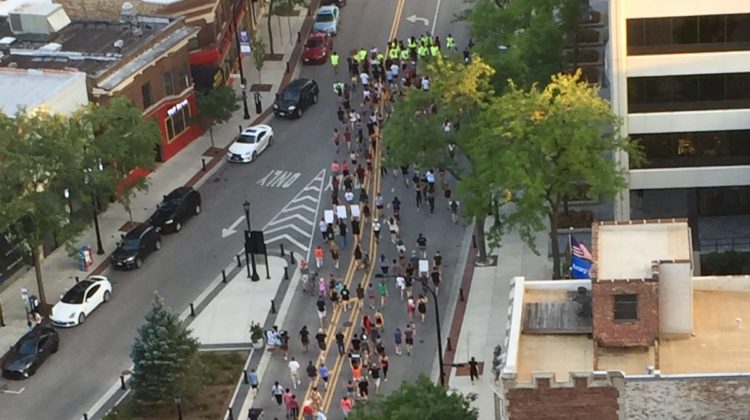 About 150 people marched through downtown Evanston this evening to protest the shooting by police Sunday in Kenosha, Wisconsin, of former Evanston resident Jacob Blake.

Marchers gathered at Ridge Avenue Church Street and marched down Lake Street and to the Evanston police station, where organizers called for defunding the police, before parading down Sherman Avenue downtown.

Police blocked traffic to protect the march from auto traffic and reported that the event was peaceful, as was a larger demonstration on Tuesday evening on Emerson Street.

The march occurred as the city’s Reparations Subcommittee was holding a town hall meeting to provide an update on its progress toward developing a process to provide funding for efforts to redress past housing discrimination in the city.

Prosecutors in Wisconsin have charged Kyle Rittenhouse, a 17-year-old from Antioch, Illinois, with murder in the shooting death Tuesday night in Kenosha of two demonstrators during protests sparked by the police shooting of Blake.

Kenosha remains under a 7 p.m. curfew this evening.