Give a bunch of Evanstonians marking pens and an oversize map of downtown, and it doesn’t take much prompting to get them to fill the sheet with their ideas for improvement.

Well over 100 people from across the city packed a humid Parasol Room at the Civic Center Monday and about 50 residents of the downtown area itself filled the air-conditioned community room at the Evanston Public Library Tuesday to start getting down on paper what charms them and bugs them about the center of the city.

There was a lot of talk about building heights, and it became clear that views, or the loss of them, can drive people’s views.

At Tuesday’s session one woman objected to plans for a new condo tower at Fountain Square, saying it would block the view to the lake from her 15th floor condo in the newly built Sherman Plaza development.

No sooner had she finished than another woman at the same table said, "Your building blocks my view. I used to be able to see all the way to Wrigley Field."

And a third woman said that the second woman’s building had blocked the views from her condo. 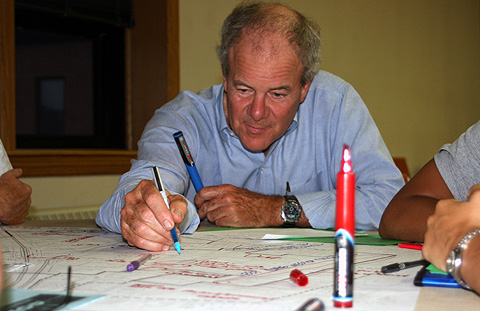 John Kennedy of the Friends of the Civic Center failed to persuade aldermen to hold a charrette to rethink that building, but adds his marks to the map at the opening downtown charrette session Monday.

On Monday some city consultants at the tables tried to turn discussion toward the views pedestrians see as they walk down the street — what views are great now and which could be better. Residents: 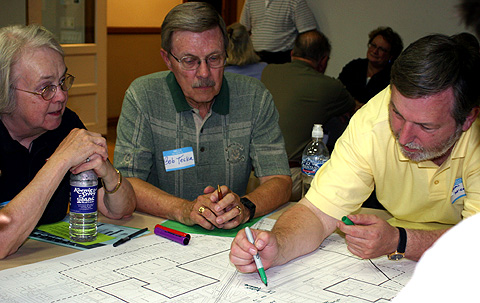 As for zoning, predictability was one mantra that most participants seemed to agree upon. There was widespread condemnation of the planned development process under which developers can win greater building height and density in return for providing public benefits that critics see as insignificant.

The consultants promised that the form-based zoning pilot project they are developing for downtown could address that concern, offering specific rules for the shape and size of buildings, with illustrations included to make the rules clear for everyone to see.

But it’s less clear whether rules that are clear will also prove acceptable to the divergent voices in town — some of whom want continued development and others who believe there’s been too much development already.

The charrette continues through the week with drop-in hours during the day at the temporary charette design studio at 1630-1632 Orrington Ave., a review session at the studio at 7 p.m. tonight and a closing presentation at 9 a.m. Saturday at the Civic Center.