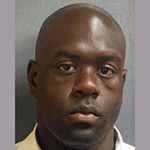 Evanston police have charged a 36-year-old Skokie man with the attempted armed robbery of a barber shop on Emerson Street Friday.

Police Cmdr. Jay Parrott says that about 10 a.m. Friday police responded to a report of a man wearing a mask and gloves trying to gain entry to the Supreme Image barber shop in the 1600 block of Emerson Street.

When they arrived at the scene they learned that the man had fled on foot after he couldn't get into the shop because employees had refused to buzz him in.

After police broadcast the would-be robber's description, another officer spotted a man fitting the description in the midst of changing clothes in the 1400 block of Church Street and detained him there.

Parrott says officers recovered a glove from the suspect and later recovered a loaded .40 caliber semi-automatic handgun and mask used in the robbery attempt.

Detectives investigating the incident obtained a statement from the offender and identified the items recovered as being used in the incident.

Police have charged Devin A. Strong, 36, of 3501 Church St. in Skokie, with attempted armed robbery and aggravated unlawful use of a weapon.