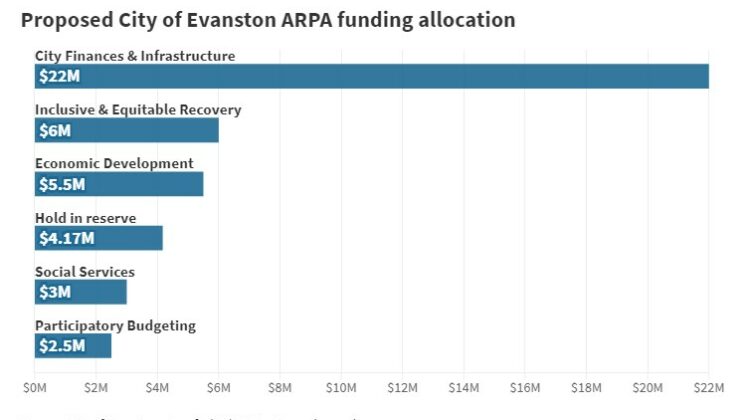 Ahead of Monday’s City Council discussion about how to spend federal pandemic aid funds, Mayor Daniel Biss told 5th Ward residents Thursday night that the $43 million represents a one-time investment opportunity, and that if the city gets it right, “it can change the trajectory of what we’re doing in Evanston.”

“We want the community at the table helping us make sure” the funds are allocated “in keeping with community values and priorities.”

After three town hall meetings last month, city staff has prepared a proposal for discussion Monday about how to divvy the funds up into several broad spending buckets and has outlined a process for making decisions about how to allocate the money in each bucket to specific projects.

The staff recommendations, Biss stressed, are “not binding, just advisory.”

“We want the public to be involved at every step along the way,” the mayor added.

The staff proposal allocates just over half of the American Rescue Plan Act funding to a bucket labeled City Finances and Infrastructure.

She says the first projects in line for that funding — $3 million for water projects and $950,000 for parking capital projects — will be presented to the Council in August in an effort to avoid having to borrow to fund them.

Also up for approval at that meeting will be a $300,000 supplemental funding for the guaranteed basic income program and about $100,000 to fund creation of an implementation plan for the city’s Climate Action and Resilience Plan.

More projects, she says, will be presented at a Council meeting in September.

The staff proposal allocates $6 million to Inclusive & Equitable Recovery. Storlie says the ARPA program encourages using a portion of the federal funds to address the greater impact of the pandemic “on low-income communities with pre-existing health and economic disparities, as well as housing insecurity” and that Evanston census tract 8092, mostly in the western part of the 5th Ward, qualifies under the federal guidelines.

She says a range of programs could be eligible under those guidelines, including ones providing supportive housing for the homeless, affordable housing development and rehabilitation, childcare programs and support for non-profit service providers to expand their capacity.

The plan allocates $3 million for social services, and Storlie says the process there would be similar — an open call for projects, which would then be reviewed by the Human Services Committee and City Council.

Storlie suggests that after the social services and economic development funds have been allocated, the city should conduct a Participatory Budgeting Process to give community members a direct say in the allocation of $2.5 million of the ARPA funds, and she suggests holding in reserve $4.17 million “in case COVID-19 restrictions need to be put in place again due to a resurgence or to address still unmet needs identified after the first funding allocation.”