Evanston Mayor Lorraine Morton in her state of the city address today criticized City Council plans to raise taxes on meals at the city’s restaurants. 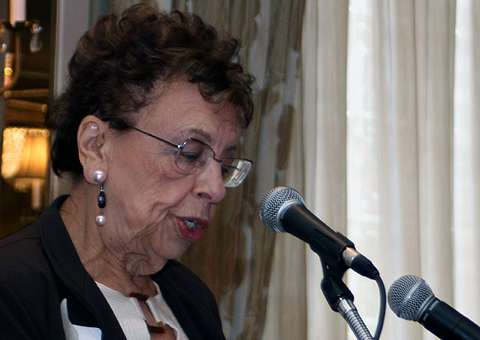 "We must find ways to stimulate more revenue for the businesses that we already have," the mayor said, "We cannot afford to kill the goose that laid the golden egg — our restaurants — by mandates that will force patrons of our restaurants to go elsewhere."

Aldermen have approved plans to increase the tax on restaurant meals and non-alcoholic beverages by 1 percent, which they hope would raise $846,000 a year to help close the city’s budget gap.

But restaurant owners have argued the increase will drive business away to other communities — especially banquet business where the new tax, coupled with already high taxes on restaurant liquor sales — could mean several hundred dollars added to a large event’s bill.

She said the city must raise taxes substantially this year to increase funding for police and fire pensions.

She claimed that city officials thought they were providing enough money for the pensions and she urged reform at the state level to reduce the pension burden on municipalities.

"We have done a tremendous job" of bringing new development to the city, the mayor said, arguing that but for the pension problem the city would have little need now to raise property taxes.

The mayor, making her 15th annual state of the city address at a Chamber of Commerce-sponsored luncheon at the Hotel Orrington, also voiced fears about what she said were 313 properties in various stages of the foreclosure process in the city as a result of the nationwide sub-prime mortgage crisis.

The mayor discussed the proposal for a 49-story condominium tower at 708 Church St. at length, saying that she’s never had as many people speak to her about any other issue in all her time as mayor.

But she gave little indication of her own views on the project.

She defended the city’s effort to deal with this winter’s snow storms, saying the city has received twice as much snow as in a normal winter with many more than the typical number of storms.

She said that after the city’s salt supplies ran dangerously low, with no more salt to be had locally, city truck drivers were dispatched to Cleveland, Ohio, to pick up 200 tons of salt to provide an emergency supply.