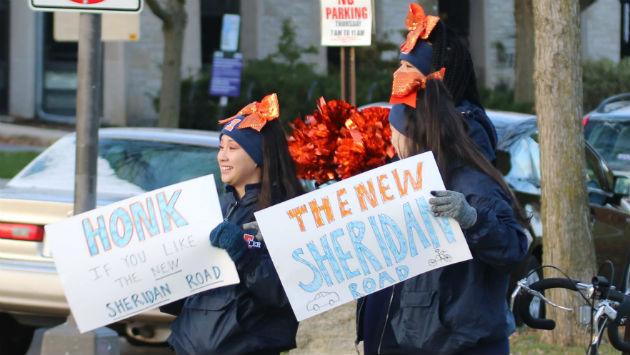 Evanston city officials, aided by some high school cheerleaders, gathered this morning on Sheridan Road to hold a ribbon cutting to mark the completion of a project at least five years in the works.

That’s the complete repaving of Sheridan with the addition of protected bike lanes and the replacement of water mains beneath the roadway.

Despite freezing temperatures some cyclists were actually using the bike lanes along the Northwestern University campus as the 8 a.m. ceremony got underway.

The multi-million dollar project, funded with state and federal grants and more than $1 million in contributions from the university, stretches from Chicago Avenue and Grove Street to Sheridan Road’s intersection with Isabella Avenue at the north city limits.

Just the water main work, which was completed in 2015, cost about $5 million.

The city received a $1.5 million federal grant for the bike lane portion of the project in 2014.

But disputes over design of the project and a need to avoid obstructing traffic on Sheridan Road while Green Bay Road was being worked on in 2016 delayed the start of the bike lane work along the campus until last year. The final phase of the project, from Lincoln Street to Isabella was completed this fall.

Before cutting the ceremonial ribbon, Mayor Steve Hagerty said the “complete streets” project — serving pedestrians, cyclists, bus riders and “people still driving cars these days” is “a great illustration of what we’re trying to do here in Evanston.”