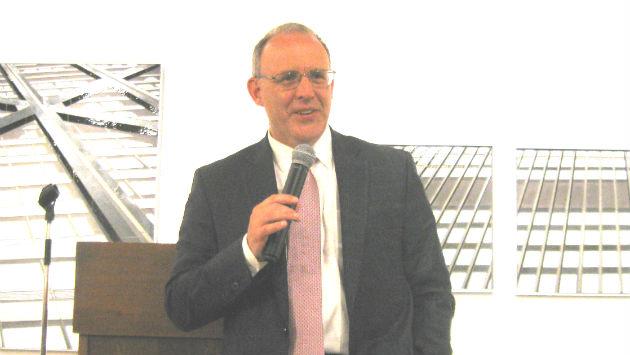 Just because 50 people may show up at a City Council meeting to protest a proposed development does not necessarily mean that turning it down is the best option for the majority of Evanston’s citizens, Mayor Steve Hagerty told a citizens group at the Evanston Art Center Thursday night.

The mayor made his remarks as the featured speaker at the final meeting of the 2017-2018 season of the Current Events Class of Evanston, a group that meets five times a year to hear a speaker on some topic of importance to local residents.

Having just completed his first year as Evanston’s mayor, Hagerty reflected on his experiences as the city’s chief elected officer and bemoaned the fact that individual aldermen are often pressured by  constituents  who do not necessarily have the best interests of the community at heart.

While not specifically mentioning it by name, Hagerty’s experience before last year’s mayoralty election included chairing a committee to determine the fate of the Harley Clarke mansion on the city’s northeast side.

A proposal from Hyatt Hotel heir Col. Jennifer Pritzker to turn the historic mansion into a tax-generating boutique hotel had been turned down by the council five years ago after a massive public outcry that ultimately resulted in its defeat.

In his remarks to the Current Events Class Thursday night, the mayor described the tenuous nature of major development proposals, such as the recent failed attempt to relocate the Northlight Theater to downtown Evanston.

When such plans fail due to a public relations effort by a small percentage of the area’s taxpayers, the mayor contended, it is often years before a better plan comes along, while local property taxpayers suffer the consequences in the meantime.

He outlined some of the factors that adversely impact the city budget, such as a decline in building permit revenue as a result of a slowing construction environment on the Northwestern University campus, as well as uncertainty about revenues from the beleaguered budget of the State of Illinois.

There is also concern, he said, over the plan of the U.S. Census Bureau to add a question about an individual’s citizenship to the 2020 census that could result in an undercounting of the city’s population, on which some federal funding to municipalities is based.

On the plus side, he noted that the new Target store in downtown Evanston is generating record sales and that the prospect of a new Binney’s Beverage Depot in the former Whole Foods store in the 1100 block of Chicago Avenue will bring considerable revenue to the city.

A number of developments, he noted, are bringing more residents to downtown Evanston and the proposed site for businesses on the downtown library parking lot will bring more workers to the city, which will be a plus for area restaurants and retail establishments.

“We want to have a downtown that is a mix of business and residential,” Hagerty said, noting that “hundreds and millions of dollars are waiting to be invested in Evanston.”

Hagerty said he does not favor raising the property tax rate, but that he would rather see an expansion of the city’s tax base that is represented by new development.