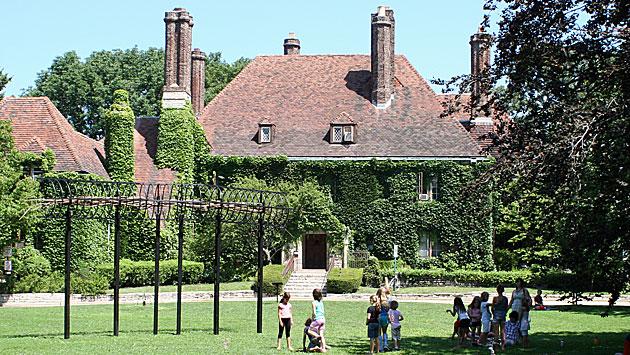 Evanston’s mayor says the city is considering selling the lakefront Harley Clarke mansion because it doesn’t have the money to repair the building.

Mayor Elizabeth Tisdahl, at this week’s City Council meeting, criticized an online petition campaign opposing sale of the mansion, saying the campaign was “spreading an enormous amount of misinformation” and “causing great consternation in the community.”

The petition drive was organized by Alex Block, who, based on an internet search, appears to be a former student representative to the Evanston Township High School board and a student at Miami University of Ohio.

Block has not responded this morning to an email message from Evanston Now concerning the substance of the petition or his misappropriation of a copyrighted Evanston Now photo for use on the petition.

While the petition claims that the City Council has discussed the possible sale of the mansion “mostly behind closed doors,” Tisdahl says the council “has discussed the future of the building publically for the last three years and decided over two years ago to begin a process to examine other uses for the building.”

The controversy over closed-door talks came after city officials said a recording of a closed-door session in Feburary was accidentally destroyed. Minutes of that session are now available online.

The mayor, in a letter responding to people who have signed the petition, adds that what are now “preliminary discussions” about a sale to the one remaining bidder, of four who initially submitted proposals for reuse of the mansion, “include maintaining complete public access to the grounds and beach.”

The initial bid from Col. James N. Pritzker was for $1.2 million, but he reportedly has indicated a willingness to raise the offer for the property, which was valued at $2.5 million in an appraisal last year.

The mayor says the city “has made no decisions on a price or terms of a sale of the property” and that any future use for the mansion “will be discussed by the City Council in open session and community meetings will be held before any final action is taken.”

The mayor says the Evanston Arts Center, which currently leases the building from the city for $1 a year, is in the midst of “identifying a new location for its operations in order to increase its accessibility to residents and improve its facility.”

The arts center, the mayor added, “has always been welcome to remain” in the mansion “until the building is deemed unsafe, a choice they have wisely declined.”