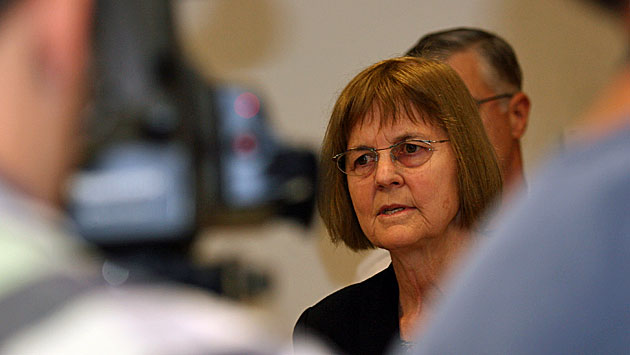 The mayor, speaking at a news conference announcing the arrest of 20-year-old Wesley Woodson on murder charges in the case, also voiced sympathy for the Coleman family.

Dajae, the mayor said, was an example of the the best in the community — a wonderful young man who'd taken advantage of every opportunity the City of Evanston has to offer.

She also praised high school students who came together to show their sorrow and support for Coleman's family ater the shooting.

The mayor said she was sorry it turned out that the perpetrator was an Evanston resident, and said that showed "we must work even harder as a community" to make sure the opportunities the city offers are taken advantage of by all our youth."

Police Chief Richard Eddington said police officers had worked tirelessly on the Coleman case to bring it to a successful resolution and praised the North Regional Major Crimes Task Force and the county state's attorney's office.

"Without their assistance we wouldn't be here today," Eddington said.

The chief added that the partnership between the police department and the community had played a critical role.

The willingness of community members to share with police what they know about an incident "is what makes difficult matters like this resolvable," the chief added.

Update 5:28 p.m.: In a statement issued later in the afternoon, Mayor Tisdahl called for gun buy-back programs and other strategies to get guns off the street.

And she called for increased efforts "to engage youth in meaningful activities" to direct their lives away from crime.

She encouraged residents to turn out for Tuesday's community meeting on protecting and engaging youth that's scheduled for 7 p.m at the Fleetwood-Jourdain Community Center, 1655 Foster St.

Top: Mayor Tisdahl speaks to the television cameras at this afternoon as Chief Eddington stands behind her.

Man charged with murder in death of 14-year-old

Murder a case of mistaken identity