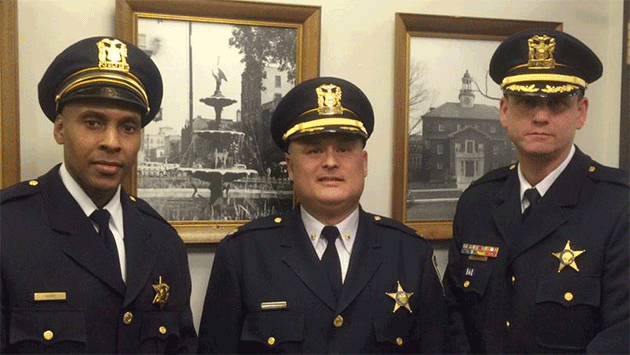 Evanston Mayor Elizabeth Tisdahl took the occasion of a promotion ceremony for three city police officers Monday night to praise the department's performance in being "in touch with the community."

Several aldermen offered praise similar to the mayor's remarks later in the meeting.

Here's the text of the mayor's comments:

“As we begin 2015, I want to take an opportunity to reflect on an important issue that received much attention at the end of 2014.  The role of law enforcement in communities around the country has been discussed and debated for years.  The issues of fairness, transparency and effectiveness of the actions of a city’s police department are serious points of community dialogue.

In Evanston, we too have had these discussions over the years.  Today’s Evanston Police Department (EPD) is one that is in touch with our community.  First, the make up of the department reflects the diversity of our community.  This is an accomplishment that few area police departments can match.  Our residents see people like themselves protecting our community.  Second, the department is sensitive to all aspects of our community.  The EPD’s Problem Solving Team works in our neighborhoods with residents to solve community problems, where law enforcement is only one part of the solution.  EPD works with City of Evanston departments and community partners to address community problems together.  EPD officers participate in ward meetings, work closely with City outreach workers and have a regular presence through school resources officers at Evanston Township High School.  This approach to policing not only makes Evanston a safer community, but helps maintain trust and confidence in our police department.

The successes we have in connecting the community and our police department comes from the hard work of the men and women of the Evanston Police Department.  Under the direction of Police Chief Richard Eddington, our police officers understand our community.  Chief Eddington and his staff are committed to continually evaluating this relationship and making needed adjustments to ensure this understanding and connection to the community continues.  All of us owe a debt of gratitude to the officers of the Evanston Police Department for their fine work.

Evanston will continue to face challenges in 2015 on many fronts.  I am confident that all of us working together will keep Evanston a special place.