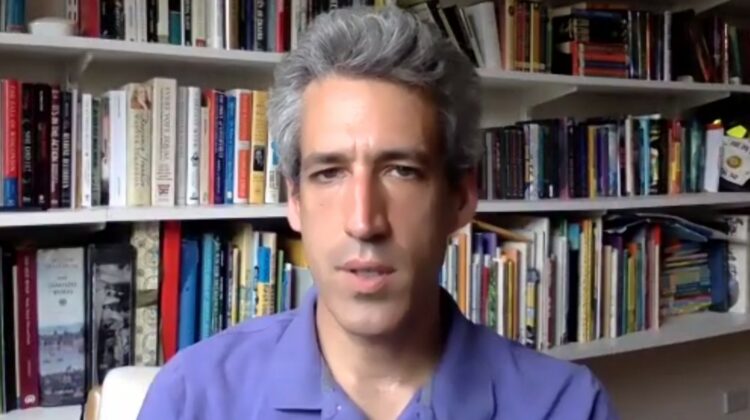 Evanston Mayor Daniel Biss, in an email to supporters today, said he first heard about reported sexual abuse of workers at the city’s lakefront in mid-June, nearly a month before the first published report about the situation.

Biss says he’s “frustrated with myself” about his own delays in following up on the issue and concerned that the city officials who learned about the complaints a year ago didn’t take more extensive action then and that apparently “nobody even showed” the petition submitted by more than 50 current and former lakefront staff members “to the City’s most senior leaders.”

The issue became public when WBEZ radio reported the charges last Friday. The City Council held a closed-door session to discuss the issue on Saturday.

Update 5:10 p.m.: WBEZ today reported that City Manager Erika Storlie wrote in an email to elected officials this week that she was putting the city’s human resources division manager, Jennifer Lin, on paid administrative leave, for failing to share the workers petition “with me or anyone else in the City Manager’s Office or the Law Department.”

“This obviously represents a serious institutional failure that we must get to the bottom of and rectify,” Biss wrote. “Additionally, while some important steps were taken, including the establishment of sexual harassment training for all lakefront staff and the identification of a trusted Parks, Recreation and Community Services Department employee to receive any complaints, it is clear that more should be done.”

Biss said the independent investigation by an outside firm that the city announced Monday will review not only what occurred on the lakefront, but how the City responded.

“The purpose of this investigation,” the mayor added, “will be to give us a clear picture of what happened, as well as a roadmap for both solutions and accountability.”

Here’s the text of the message from the mayor:

Last Friday, WBEZ ran a far-reaching report illuminating horrifying allegations of sexual misconduct by lakefront staff. The report described a petition signed by more than 50 current and former staff members and delivered in July of 2020 to several City of Evanston officials.

It’s hard to even comprehend the extent of what’s outlined in this petition, which includes descriptions of sexual assault against minors as well as a pervasive culture of harrassment and abuse. It seems obvious that anyone reading this document would instantly commit to doing anything and everything possible to address this issue. Nonetheless, it is apparently the case that nobody even showed it to the City’s most senior leaders.

This obviously represents a serious institutional failure that we must get to the bottom of and rectify. Additionally, while some important steps were taken, including the establishment of sexual harassment training for all lakefront staff and the identification of a trusted Parks, Recreation and Community Services Department employee to receive any complaints, it is clear that more should be done.

That’s why the City has committed to hire an independent, outside firm to do a complete investigation, not only of what occurred on the lakefront, but additionally of how the City responded. The purpose of this investigation will be to give us a clear picture of what happened, as well as a roadmap for both solutions and accountability.

I promise that I will do everything I can to ensure that our City government fully lives up to our community’s values and that everyone who comes in contact with us, whether as an employee or community member, whether on the lakefront or elsewhere, is safe. I will not stand for anything less.

The young people who came forward—including four organizers of the petition as well as more than 50 signatories who also shared their stories—did our whole community an enormous service. They did so knowing that, tragically, our society too often adopts a “blame the victim” approach and mistreats survivors. So far, the City of Evanston has not given them the reaction they deserved. I am committed to changing that.

Finally, I am committed to full transparency with the community as we go through this process, and in keeping with that commitment I feel a responsibility to share with you a timeline regarding my own knowledge about this situation:

On Saturday, June 19, 2021, I received an email from a community member who had heard about some of these problems. I followed up by phone to see if that person could connect me with people who knew more, and they agreed to try.

On Tuesday, June 22, that community member shared the phone number of one of the organizers of the petition with me (with permission).

On Wednesday, June 23, I was able to speak with the organizer in question, who told me many very alarming things about their experience on the lakefront and made me aware of the petition. I asked if they would be comfortable sharing the petition with me so long as I committed to keep it to myself, and they said yes.

On Thursday, June 24, I received the petition. I read it for the first time late that night.

On Friday, June 25, I called the acting City Manager to discuss this (the City Manager was out of town at the time). She was unaware of this issue but after some discussion with both myself and other staff agreed to quickly set up a meeting with the staff in the Parks, Recreation and Community Services Department and Human Resources Division to discuss what they had done to address this problem.

On Wednesday, June 30, that meeting took place. I was not persuaded that the City had done all it could have done, and we adjourned after making a specific plan regarding how staff would seek to get me more information.

During the next several weeks, I followed up multiple times with various staff members but did not get that information.

On Thursday, July 15, two other lakefront workers generously agreed to speak with me, and shared with me an assessment of how things have improved at the lakefront, as well as serious concerns about how the City had responded to the petition.

As I write this timeline, I have two takeaways. First of all, I am immeasurably grateful to the three current and former employees who have been willing to speak with me. It is not their responsibility to do this, and in fact they’ve done so at risk to themselves. I take incredibly seriously the trust that they placed in me to respect their privacy and confidentiality—as well as to take action to solve this problem.

Secondly, I am frustrated with myself about the two-week gap that occurred after my meeting with City staff. Frankly, I was frustrated during the gap itself, but it literally did not occur to me as a possibility that anyone who’d seen the petition could be lackadaisical about this issue, and so, while continuing to check in and push, I also assumed that everyone was acting with the same urgency that I was. This is something I can learn from.

This is a very difficult situation for our community. I appreciate your willingness to hold our whole City, including me, accountable. We owe that not only to the people who work on our lakefront but to everyone who comes in contact with the City of Evanston.