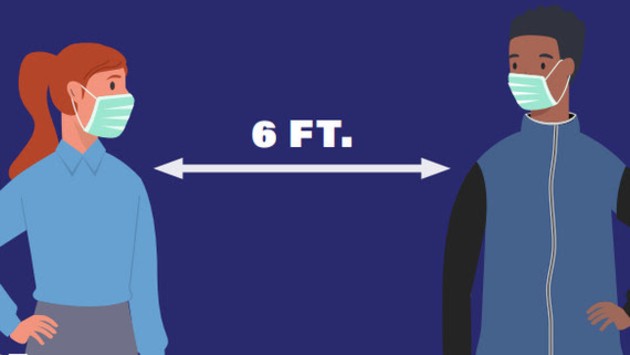 Naturally, at this moment in time, we all have many worries. When will the pandemic end? When will our children go back to school? Where are we in the continuum? Why isn’t everyone always wearing a mask? Are our beaches safe? Will our downtown survive? Will cases rise when Northwestern students return? What happens to those whose unemployment assistance ends?

The list of worries is long. While I don’t have the answers to every question, today I would like to address some of the statements and questions raised to me over the last month.

Cases have increased at the State level in July. Have we seen a similar rise in Evanston?

Still, cases are increasing in our own state and many other states. Wouldn’t it be irresponsible to think that won’t happen in Evanston?

Yes. We anticipate that we will see cases increase in Evanston, although interestingly, we have not seen a significant rise in cases despite large protests, the reopening of indoor restaurants, salons, day cares, summer camp, and the beach. This implies that with the right measures practiced regularly by all of us, we can contain and manage this virus. Our objective as a City remains reopening safely, strongly encouraging all individuals and organizations to follow public health directives, and monitoring the data closely.

We don’t live in a bubble. People come and go from Evanston just as they do Chicago and other areas around the State.

You’re right. It is for that reason that Governor Pritzker issued a plan to combat the resurgence of COVID-19. This three-page plan, which I recommend everyone read, presents new metrics that will be monitored for each of the 11 Emergency Medical Service (EMS) regions; any tightening of restrictions will occur at the smaller EMS Region level, rather than the four larger geographic regions used in the Restore Illinois Plan.

Evanston is in Region 10. You can monitor how our region is doing here. Currently, our region is trending in the wrong direction; meaning that even though Evanston’s numbers are positive, that’s not the case overall in our region.

Isn’t it of concern that Evanston is a different region than Chicago? Given our proximity, wouldn’t it be better for us to follow Region 11, Chicago’s region, than Region 10?

Yes. Evanston is different than other suburbs in Cook County and we must, and will, pay close attention to the metrics in Chicago. In fact, if we see large discrepancies between Region 10 and 11, we may make City-specific modifications, much like we did when we instituted a face mask requirement before Governor Pritzker’s statewide Order.

Why aren’t we taking the strong actions that Mayor Lightfoot is taking in Chicago, such as closing our beaches and imposing a mandatory 14-day quarantine for those that have travelled to certain states?

The decisions we make in Evanston have been and will continue to be based on facts, data, science, and the guidance of local and State public health officials. In most instances, we will continue to defer to the Governor’s Office, which has more resources and expertise available.

We do review our metrics regularly to understand our cases relative to other cities. Per 10,000 residents, Evanston continues to have approximately 100 fewer cases than Chicago and 50 fewer than Skokie.

Okay, Mayor, but there are a lot of people at the beaches in Evanston and many of them are from Chicago. Why don’t we close the beaches or restrict them to Evanston residents only?

I am pleased to see so many people outside. Public health officials want us outside. They know that there is less transmission outside than inside. It’s one reason they worry about a rise in the fall and winter.

Our beaches will remain open. We have made adjustments due to the pandemic, including limiting capacity to 50%. Additionally, we have made modifications, including closing the beaches to sand activities at 9 p.m. to improve safety and reduce large nighttime group gatherings that were occurring. Lastly, effective July 31, the Parks, Recreation and Community Services Department will further reduce capacity by at least 10% by limiting the number of day passes being sold. Anyone without a seasonal pass is encouraged to contact the beach office before coming to the beach to verify if daily passes are still available.

It is required and essential that we all wear a mask outdoors when we cannot maintain a six-foot distance from one another. At this time, we have no plans to impose a mandatory outdoor mask policy. Our decisions will continue to be guided by public health experts and science.

Shouldn’t we impose a 14-day quarantine, similar to Chicago, on anyone travelling to or returning to Evanston from states where the outbreak is increasing?

Setting aside how a City enforces such an Order, for now we are going to encourage Evanstonians to continue to exercise their good judgment about getting tested and quarantining after travelling. We are recommending that residents should continue to monitor their symptoms and stay home if they become sick. My expectation is that all of us will continue to follow the advice of the CDC and IDPH.

But clearly, the arrival of 6,000+ Northwestern students will bring with it an increase in COVID-19 cases.

With or without the arrival of NU students in September, we anticipate that positive cases may rise. The objective for us is to manage the rise in such a way that it doesn’t send us back into crisis care, whereby we are at risk of rationing medical care.

Nonetheless, the influx of 6,000+ students is a concern not only to the City, but also to Northwestern. Our Health and Human Services Director, Ike Ogbo, has and will continue to work closely with Northwestern as they develop and finalize their plan, recognizing as we all do, that the plans may change based on the regional pandemic data. While the University’s plans are still under development, I can share with you that they will include (1) testing all students, on or off campus, when they return to Evanston for Northwestern programming or courses, (2) a separate NU dedicated, robust testing operation (meaning the testing capacity in Evanston will remain unaffected), (3) a dedicated NU contact tracing unit, and (4) a set-aside residence hall for COVID-19-positive students.

I’m concerned though that spread will occur in the neighborhoods because more students may be living off campus.

It is true that NU will be limiting on-campus units to one per room unless students specifically ask to room together. However, because many of NU’s classes will be remote, it’s uncertain at this time how many students will return to campus (hence the reason I’ve used an estimate of 6,000 and not 8,500). So, at this time there is no indication that more students will live off campus than in prior years. Regardless, all students will be tested upon their arrival as noted above. As a City, we will continue to work with the University on their off-campus monitoring procedures.

What about Evanston schools? Both school systems have announced that they’ll begin the year with e-learning. Will the schools or City be taking any actions to help parents during this time?

We recognize the immense strain placed on our students, families, and teachers during this pandemic. In the last week, ETHS and D65 have released their plans. The City is working closely with both districts to address families’ concerns about breakfasts, lunches, and childcare.

Statewide testing capacity increased to more than 30,000 tests per day in late June and has continued into July with over 44,000 tests conducted yesterday. In Evanston, AMITA Health St. Francis Hospital has partnered with the City to offer three community testing events. We are looking to expand this with other health providers. To date, 13,965 Evanstonians have been tested overall, with 850 testing positive (6.1%).

The $600 unemployment benefit supplement is ending on July 30. What are we doing to help our unemployed residents?

I have been in touch with Senator Durbin, Senator Duckworth, and Representative Schakowsky, and they are working tirelessly to get Congress to extend this aid to the unemployed. Without an extension, all of us will need to do our part to help our neighbors. I am proud of all the Evanstonians who have supported the Evanston Community Foundation’s Evanston Community Rapid Response Fund and other relief funds, and rolled up their sleeves to help at local food banks, shelters, and other places of need.

Finally, where are we in the continuum? When will this be over?

That is the million dollar question. We know from the 1918 Pandemic that there were two waves in Evanston. I can’t tell you where we are today, but I can tell you that on the hundreds of conference calls and email conversations I’ve had with public health officials, not once has anyone questioned whether we’ll be able to develop a vaccine. The question is, when? I do know this, if our response as individuals, families, and as a community is as strong moving forward as it’s been since March, we will all look back proudly on the sacrifices we made to help one another and our community.