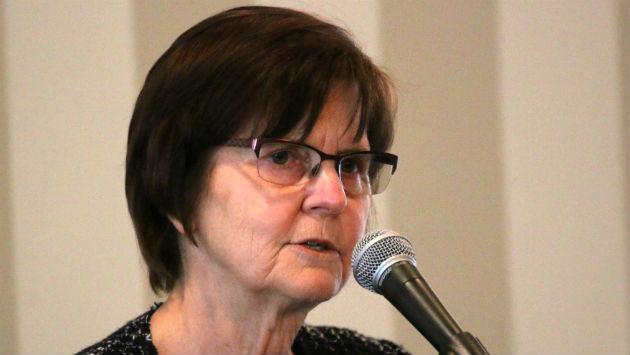 Evanston Mayor Elizabeth Tisdahl, in her state of the city address this afternoon, said the city is not getting the results it needs quickly enough in reducing gun violence.

Tisdahl, discussing the January shooting death of 20-year-old Bo Bradford  — the city's first homicide of the year — and a mid-afternoon shots fired incident near a city recreation center a few days later, said young men didn't used to fire guns at a community center at three in the afternoon because they didn't want to hit their little sisters.

"But now they don't care," Tisdahl said, and it's a serious problem that the community needs to work together to solve.

The mayor said the city is "rich in services for youth" but needs to be smarter in its responses.

She said the health department recently was turned down for a federal grant that would have paid for three research interns to explore how to address violence as a public health problem, but has managed to get an intern from Northwestern University to begin the work.

She said if the city could find 1,000 summer jobs for young people it could achieve "a tipping point." If enough students are working, earning money, "it will change the culture on the street," Tisdahl said.

The Mayor's Summer Youth Employment Program — which seven years ago had just 168 jobs avaiable for over 400 applicants — this year had 650 jobs and 685 students applying.

And, thanks to an agreement with Metra to offer reduced transit fares, Evanston youths could also apply for 600 jobs at Great America in Gurnee. "This is historic, to have more jobs than applicants," the mayor said. 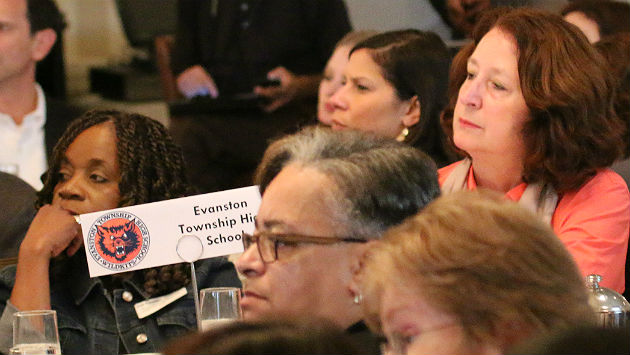 Representatives from the high school listen to the mayor's address.

Crime was down 5 percent last year from the year before, Tisdahl added, and the city has hired a consultant to provide police training "on how to optimize interactions between officers and people of different races and cultures."

"We don't have a perfect police department," she said, "but we do have an excellent one, and one that's always trying to do better."

The mayor said the city's economy is strong, with 67 new businesses opening in the city last year, up more than 50 percent from the year before, and new development projects underway.

But she voiced fears about the possible impact of the state budget crisis on the city.

The state eventually has to deal with the billions by which its expenses exceed revenue, and its billions of unfunded pension obligations, she said, and while the city has set aside $1.5 million in this year's budget to deal with possible cuts in state aid "we have no idea if that's enough."

She said the city is taking steps to reduce its own pension and general obligation bond debt. "The good news is debt levels are going down, the bad news is they are way too high." she added.