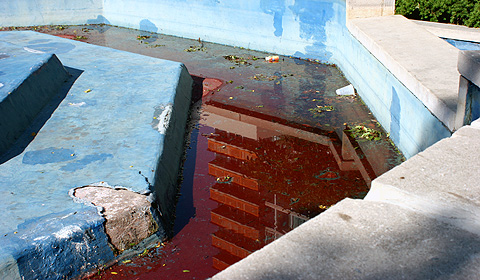 The orange balconies of Optima Towers reflect in the stagnant water of a broken fountain in the square this morning.

The mayor said she was “immensely embarrassed” that no flag was flying in the square on Memorial Day, and she read a letter from a veteran’s group complaining about that oversight and the overall condition of the downtown plaza, which holds plaques commemorating 351 Evanstonians who died in the nation’s wars.

She said that she walked through the square again on Sunday and “almost had a fit” about the conditions.

“Fountain Square is a disgrace. There’s water standing in the fountains making them a breeding ground for mosquitoes. In one place the water was as deep as my hand,” she said, “There’s dirt and leaves all over.”

“People there were asking me why an affluent city like Evanston would allow something commemorating people who gave their lives for our freedom look that way,” Mayor Morton said.

She called for immediately spending downtown tax increment financing funds to fix up the square.

City Manager Julia Carroll said she’d talked to staff and “they admitted they messed up by not having the flag flying.”

She said she’d have the staff take immediate steps to clean up the square and prepare a report on the cost of fixing the fountain and the decaying concrete plaza structure.