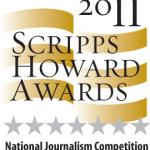 Each year, the foundation honors the best work in the communication industry and journalism education through its National Journalism Awards competition.

Lavine’s award brings with it a $10,000 stipend, which Lavine says he will donate to Medill scholarship funds.

“When I became dean seven years ago,” Lavine said, “the media industries were rocked by unprecedented change. The Medill community embraced those challenges, while at the same time strengthening the enduring values of our professions.”

In truth, he added, the award “belongs to Medill faculty, staff, and students.”

Medill was founded in 1921 and focused for many years on training journalists for newspapers, magazines, and broadcasting. In recent years, it has shifted its emphasis to journalistic techniques essential in today’s digital world. The school is named after Joseph Medill, one of the founders of the Chicago Tribune and a former mayor of Chicago.