Alderman Cheryl Wollin, 1st Ward, has lived in Evanston for nearly 40 years, and has been on the City Council twice.

In 1989 she won election as 7th Ward alderman on a platform of environmental conservation and improvements in waste management. 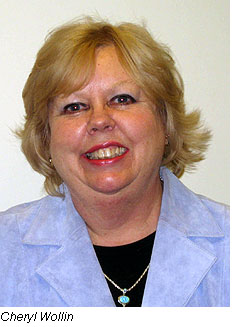 She left the council in 1993 after coming in third in a five-way primary election race for mayor. The leading vote-getter in the primary, Alderman Ann Rainey, 8th Ward, also left the council that year after losing to Lorraine Morton in the general election. Morton has served as Evanston’s mayor ever since and Rainey won re-election to her old seat in 1997.

After the defeat, Wollin moved to a new home in the 1st Ward, and continued to be involved in city government as a member of the Evanston Library Board.

Wollin says that since returning to the council in 2005, after a narrow victory over community activist Judy Fiske, she’s found the council faced with many of the same budget and real estate development issues year after year, that still need to be fully addressed.

Wollin says she hasn’t decided yet whether she’ll run for reelection in 2009.

Wollin graduated from the College of St. Teresa in 1965, and moved to Evanston after earning a master’s degree in American Studies at Northeastern Illinois University in 1969.

She now teaches political science as an adjunct faculty member at Oakton Community College, and she said her students are very engaged in the national election campaign this year.

She said her long involvement with young people at the school leads her as alderman to emphasize efforts to increase activities available for youngsters and fight the crime problems that often destroy young lives.

“We’ve got a lot of potential,” Wollin said. “That’s the Evanston of tomorrow.”

Wollin said she’s impressed with activists’ efforts to create a small farm in the city which could produce crops to sell at the farmers market and also serve an educational role.

“It’s a great concept,” Wollin said. “I’ve always been very aware about how we can bee more careful about our resources.”

But to be able to fund new initiatives, Wollin said, the city’s budget problems need to be addressed.

She said development project downtown, including the proposed condominium tower at 708 Church St. offer the promise of increasing tax revenue and attracting more businesses to the area.

She said the city is trying to reduce its spending as well, but she said it’s very difficult to actually reduce spending because of increasing costs — especially for gas and electricity.

She said she hopes the city will be able to find ways to reduce power consumption in its current operations — which would both save money and offer environmental benefits.

“I wish we could say there are areas to cut back, but it’s hard,” Wollin said. “We can try to do things more efficiently.”

Wollin is also the vice-chair of the National League of Cities, an organization of municipal governments across the country that she says works to improve life in all communities by increasing development and communication between the government officials of each city.

Wollin has met with city officials from communities across the country and shares ideas about how to make respective communities better for the residents. By doing this, Wollin hopes to help address Evanston residents’ concerns.

“Evanston is lucky that we’re a happening place,” Wollin said. “Many cities would love to have that problem.”