It was a return to public office for Tisdahl, who in 2001 had chosen not to seek re-election to the Evanston Township High School board after 12 years as a member and board president.

She won election to her first full term as alderman in 2005, winning 77 percent of the vote in a race against activist Junad Rizki. 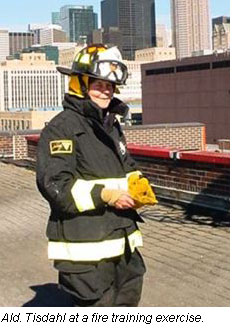 She’s a rarity among Evanston officeholders in that she’s not a college graduate. She says that while she attended Bryn Mawr College, she was an avid tennis player. She says she burned herself out and was frequently sick as a result, which interfered with completing her degree.

Tisdahl is a partner and investment analyst for the family-owned Congaree River Limited Partnership in Chicago.

She says accountability to constituents is key to success as an alderman.

“Being an alderman, you deal with potholes as well as the budget,” Tisdahl said. “People know what you’re doing.”

She said it’s a challenge to find ways to maintain Evanston’s diversity, but that it’s key to the community’s success.

Diversity leads to a greater exchange of ideas and quality of life, and it also leads to a diverse tax base, Tisdahl said.

Tisdahl says she’s seeking ways to alleviate the city’s budget crisis, and admires a plan under consideration in Massachusetts to impose a 2.5 percent state tax on college endowments greater than $1 billion.

Advocates there say the tax could raise as much as $1 billion a year for the state.

If a similar plan were adopted in Illinois, Northwestern University might have to pay $162 million each year from its $6.5 billion endowment, which is the 11th largest in the nation, according to the National Association of College and University Business Officers.

Whether municipalities, like Evanston, would see any benefit from such a state-level tax remains unclear.

But Tisdahl says the threat of such a tax might prompt the university to become more involved with helping the local community.

“I think a tax would be reasonable,” Tisdahl said.

Tisdahl also favors imposing impact fees on new construction in the city that could help pay for capital improvements to streets, libraries, parks and the municipal water service.

The City Council began considering imposing such fees in May. Tisdahl says they could be used to generate revenue from new construction at the university and local hospitals as well as from commercial developments.

She said construction of new condos has generated more property tax revenue for the city, and also increased sales tax revenue by increasing the customer base for local merchants.

But the new residents also want more services, Tisdahl said, and the impact fees could help fund them.

Tisdahl also wants to examine some of the city’s programs and determine whether they are truly necessary.

For example, she questions why the city should fund a program of the non-profit Center for Independent Futures that teaches disabled students at Evanston Township High School life skills they need to be able to live on her own. Tisdahl says that should be part of the school district’s regular curriculum and should be funded by the schools.