Alderman Lionel Jean-Baptiste, 2nd Ward, won 85 percent of the vote in his first race for the City Council in 2001 against community activist Betty Sue Ester.

He had the backing of the retiring long-time incumbent, Dennis Drummer, and of Mayor Lorraine Morton, and ran on a platform favoring both affordable housing and economic development. 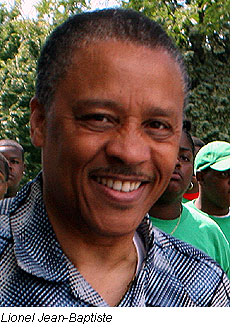 But he faced a tougher campaign in 2005 when he was bumped from the ballot after the city electoral board decided his nominating petition sheets didn’t sufficiently specify the office he was running for, because they said just "2nd Ward," not "2nd Ward Alderman."

Despite that setback he went on to win election as a write-in candidate with nearly two-thirds of the vote, raising and spending over $23,000 on the effort, believed to be a record for an aldermanic race in Evanston, and more than four times the amount raised by his first-time challenger, librarian Christopher Stewart.

Jean-Baptiste, whose family emigrated from Haiti, arrived in Evanston with them in 1964 and is a 1970 graduate of Evanston Township High School where he was student government president.

He graduated from Princeton University in 1974 as a political science major and, after spending a decade in New York, he returned to Evanston in 1984. He earned his law degree from Chicago-Kent College of Law in 1990, and got his start in community activism here working with the Canal Park Neighbors
Association.

In recent years Jean-Baptiste has supported several new development projects in his ward that have won City Council approval, including the 40-unit Church Street Village town homes nearing completion on the former Hines lumberyard property at 1613 Church St. and high-rise projects at 1881 Oak Ave. and 1890 Maple Ave. that have yet to begin construction.

He’s also worked with Alderman Delores Holmes, of the neighboring 5th Ward, to try to develop community consensus around proposals to rezone the industrial land along the former Mayfair railroad right of way for predominantly residential use.

He’s also fought for increased funding for programs to provide job training and other services for young people in the community.

Jean-Baptiste declined a request to be interviewed for this story.