Alderman Steven Bernstein, 4th Ward, says he made a promise to himself when he first sought the job in 1997 that he would never change as a person despite the internal bickering and pressures of being an alderman.

But after three terms, Bernstein says, he is annoyed with the inner conflicts. That is why he will not be seeking another term as alderman. 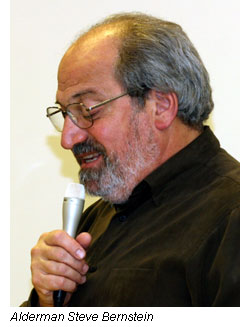 “I know how difficult it is to bring development into town, but I’m getting very frustrated, and I feel my attitude changing,” Bernstein said.

Bernstein said he has tried for many years to alleviate the city’s problems with taxes and crime, but has not seen the progress he would like.

He said he is currently looking to endorse a potential replacement he can trust to continue his work on the council.

Born in Chicago, Bernstein moved to Evanston after earning has law degree at DePaul University, and he soon became active in organizing a community group for the area near Nichols Middle School where he still lives.

He was elected to the part-time position of township assessor in 1991 and won 72 percent of the vote to defeat incumbent alderman Anny Heydemann, an English teacher at Evanston Township High School, in his first aldermanic race in 1997. He won 68 percent of the vote in a three-way race for re-election in 2001 and faced only a write-in candidate in 2005.

Bernstein, who once represented developers as an attorney in private practice, said one of his main goals as an alderman has been to diversify the city’s tax base through new development while also creating more affordable housing.

He said he’s sought to increase the city’s revenue without raising taxes on city residents.

Bernstein said creating new development in Evanston is difficult because the city lacks large parcels of undeveloped land. “We don’t have anywhere for a Wal-Mart to move in.”

But he has frequently supported new condominium and retail projects in the city.

Bernstein also says Evanston should capitalize on its strong points, particularly its diversity. Bernstein said the diversity attracts a lot of retail and a lot of different interest groups and developers to the city.

“We have everything,” Bernstein said. “That’s what makes Evanston an amazing place.”