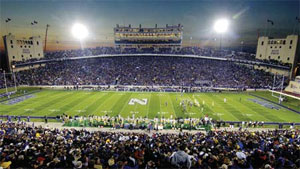 With the start of Northwestern Universiy football season just over a week away, fans are invited to Ryan Field at 6 p.m. Friday for the annual Meet The Team Night.

Head coach Pat Fitzgerald will introduce his 2012 team captains and fans can spend the evening hanging out with the players, playing games and collecting autographs.

Admission is free and all concession items will be available for just $1.

The Wildcats firshome game will be played under the lights against SEC foe Vanderbilt at 7 p.m. on Saturday, Sept. 8.

Four other Northwestern teams are already in regular-season competition this week.

Volleyball and field hockey begin their seasons on the road, and after a 2-1 OT win over Kansas in the first official NU athletic contest of the season, the women's soccer team heads back on the road, traveling to Ohio this weekend.

More about the games, including links to live coverage, can be found online.