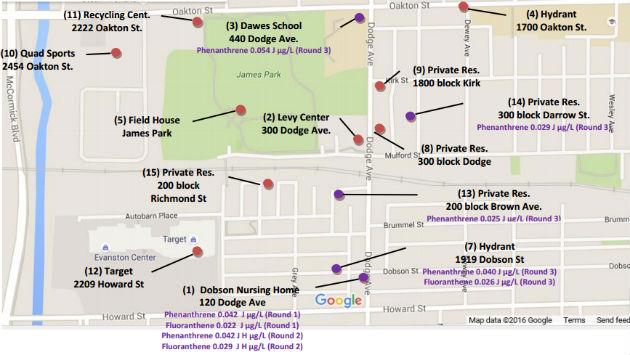 A community meeting is planned for Thursday night to discuss results of water tests around James Park that Evanston officials say turned up low levels of coal-tar related chemicals in some samples.

At a meeting in June, where results from a few sites were discussed, officials promised to expand the testing program, and they'll be reporting on that additional testing Thursday.

The city has sued ComEd and Nicor, claiming that the former Skokie manufactured gas plant, operated by predecessor companies of the utilities at Oakton Street and McCormick Boulevard during the first half of the last century, is the source of the chemicals now getting into the water supply.

Jeff Jeep, an attorney hired by the city to represent it in the suit, told residents at the June meeting that coal tar, used in the process of converting coal and oil into manufactured gas, leaked out of the plant and its pipeline infrastructure.

In June the chemicals had only been found in water tested at one location — the Dobson Plaza Nursing Home. The additional testing has turned up low levels of the chemicals — phenanthrene and fluoranthene — at four more sites.

But the Illinois EPA has set standards for them for potable drinking water that are more than 1,000 times higher than the levels found in the samples tested in Evanston.

Thursday's meeting will be held at 7 p.m. at Dawes Elementary School, 440 Dodge Ave.