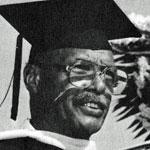 Phillips, the longest-serving member of the board, died Oct. 24 at the age of 94.

Phillips, who served on the board for 25 years beginning in 1964 and later served as the first African-American president of the board.

In an interview marking his quarter-century of service on the board, Phillips said his involvement in local school politics began when his eldest daughter was preparing to enter Kindergarten at Foster School when Evanston’s elementary schools were racially segregated.

Phillips said that he met with Oscar Chute, then Superintendent of District 65, because he was angered by the substandard education offered at Foster.

“Oscar Chute and I spent a half day in his office. He sort of challenged me. He said if you promise to get involved with the school and talk to your other friends about getting involved, I’ll start working on these things right away. So, I did and he did.”

From there, Phillips became the District 65 Caucus Committee member from Foster School, and subsequently began his service on the District 202 Board. During his time on the D202 Board, ETHS established its reputation as one of the nation’s top schools. “We were innovative. We tried things differently, but at the same time, we maintained the quality of education that we’re known for.”

In 1970 Phillips helped found an educational lobbying organization, ED-RED, representing public school districts in northern Illinois. His expertise in school matters prompted the Illinois Association of School Boards to tap him for its governing board and as a representative to its Federal Relations Network in Washington, DC. In 1988 the state education office named Phillips as the only school board member to its Special Education Task Force.

Phillips, an Evanston resident for nearly 70 years, said his biggest contribution to the ETHS board was “[my] ability to talk to and relate to and communicate with a big variety of society, at all economic levels, all racial levels, and the fact that I can keep a dialogue with them.” Phillips explained, “It’s nothing that I bought or trained for or anything, it’s just probably natural, part of the way I was raised.”

The memorial service will be held at 10 a.m. on Saturday at the First United Methodist Church
516 Church St.

In lieu of flowers, the family request that memorial contributions be made to the ETHS Educational Foundation and Y.O.U.