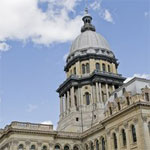 The cutting audit of the Illinois State Police's Firearm Owner Identification department concluded that, in 2010, only three of the 102 Illinois circuit court clerks reported when the courts deemed a person "mentally defective" or "intellectually disabled."

Such a determination results either in disqualifying a person from getting a Firearm Owner Identification card, or FOID, or revocation of their existing FOID card.

"There are significant deficiencies in the reporting of individuals with potentially disqualifying mental health conditions to the Illinois State Police (or ISP) that seriously undermine the effectiveness of the FOID program," the audit, released Thursday, said.

Monique Bond, an ISP spokeswoman, admitted that because of poor communication between circuit court clerks and the ISP individuals deemed "mentally defective" or "intellectually disabled" have purchased guns and ammunition.

Bond said in an email that the FOID "department has already been in contact with the Illinois Administrative Office of the Courts for assistance in communicating with the courts and clerks and is partnering with the Attorney General's Office in drafting a letter to the Clerks explaining the requirement."

Gina Noe, Marshall County Circuit clerk and president of the Illinois Association of Court Clerks, which lobbies on behalf of circuit court clerks, said the role of the clerks is clerical. She blamed judges and courts for the breakdown in communication.

"The court must make the determination that an individual is mentally defective, and as such direct the clerk to notify the State Police of that status. Without that direction from the judge and court, the clerk would be in the position of making determinations regarding who is entitled to a FOID card. Such a situation would not only create potential liability for the clerk's office, but usurp the authority of the court," Noe said in a written statement.

State Rep. Richard Morthland, R-Cordova, asked for the audit last April just before the Associated Press filed a Freedom of Information Act request seeking the names of all FOID cardholders. The wire service's request was denied by the ISP and eventually by a court injunction.

Shortly after the 2011 ruling the General Assembly passed a law exempting FOID card information from the state's Freedom of Information Act.

Morthland said he believed an audit of ISP's FOID division to see who was being approved for gun ownership was better than opening gun owner records to the public.

"That's kind of a big deal, if these county governments are not in compliance with state law," Morthland said.

Morthland said he wanted to review the audit further before offering any suggestions for fixing the situation.

Jonathan Lowy, director of legal action at the Brady Campaign to Prevent Gun Violence, a gun-control advocacy group, agreed with Morthland that the situation regarding FOIDs was cause for concern.

"It's crucial that Illinois, like other states, get all the relevant records into the system and make them accessible to make sure that dangerous people don't get guns," Lowy said. "A background check is only as good as the records you check."