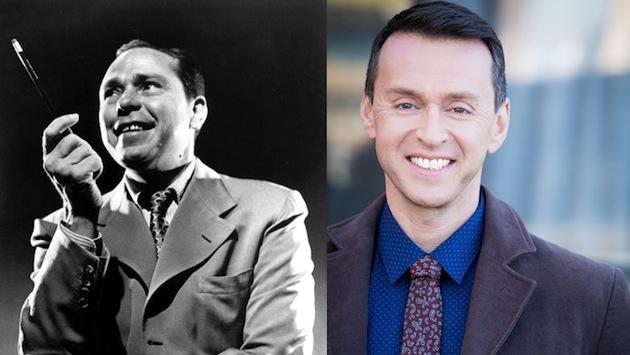 Andrew Lippa, Broadway-famous composer of hits like “The Wild Party,” is one of several mentors for the 10th Anniversary Johnny Mercer American Songwriters Project at Northwestern University this summer.

The project, a collaboration of the American Music Theatre Project at Northwestern and The Johnny Mercer Foundation,  features 15 emerging professional songwriters from across the United States, in residence at Northwestern for a week long program of master classes, workshops, and a final performance from the group.

Organizers say the project is unique in its mentorship component, inspired by the legacy of Johnny Mercer, who wrote such hits as “Moon River” and “Glow Worm.” The project mentors, which for 2015 include Craig Carnelia, Andrew Lippa and Lari White, lead master classes for the emerging artists to stimulate and hone their work.

Jonathon Brielle, Vice President of the Johnny Mercer Foundation, spoke of the master classes as group activities meant to throw many types of musical styling into a melting pot to spark innovative ideas.

JONATHON BRIELLE: Students work in small groups as well as all together. The focus is primarily on lyrics and the truth telling of the lyric and story. I liken it to teaching songwriters the Meisner Acting Technique. It is a safe environment where mentors help writers to write the songs and stories the writers want to write, not the songs or stories the mentors think they should write.

Some writers experience a breakthrough "ahah" moment, of something that has been bubbling under; some writers realize more detail in their writing that they have not given it. Other writers benefit from the way other teachers and writers work. The purpose of our combining the styles of all forms of music is so that writers can learn from each other's tricks.

The mentors/master class teachers are a carefully selected group, chosen for their contributions to the music community.

How are the master teachers who participate chosen?

BRIELLE: Michael Kerker from ASCAP originally put the group of teachers together when it began ten years ago. The program was initially more focused on theater writing – blending Northwestern's theater program with Michael's background at ASCAP.

After I joined the board, Michael and I wanted to make sure we were reaching all styles of writers. So now, together with Ryan Garson, we try to make sure our mentor teachers represent different styles of writing. To that end, Lari White represents our country writing, we've had Lin-Manuel Miranda on the rap theater side [etc.]

Of the three heavily lauded mentors for 2015, Andrew Lippa has the strongest connection to Northwestern’s previous year of stage work. Lippa is the Tony and Grammy Award-nominated composer of recent Broadway hits including “Big Fish,” “The Addams Family,” and the musical that just graced Northwestern’s stage, “The Wild Party.”

Lippa spoke with Evanston Now about some of his interests and connections to the American Music Theatre Project and the Johnny Mercer Project.

What’s your connection to the American Music Theatre Project?

ANDREW LIPPA: I wrote a musical called "Asphalt Beach" that AMTP developed at the end of 2006.  Independent of that, I had been asked to be a co-teacher at the Mercer program and have returned almost every year.

Northwestern just produced “The Wild Party.”  How did you conceive this musical? Describe your favorite production of it so far – if you have a particular favorite.

LIPPA: I saw the NU production of my "Wild Party" and it was terrific.

I read the poem of "The Wild Party" at the end of 1995 and immediately knew I wanted to write it into a musical. And so I did!

Favorite production? Well, the original one in NYC (with Idina Menzel, Brian d'Arcy James, Julia Murney, Taye Diggs) will always be at the top of the list. The one in Austria starring German musical theatre star Uwe Kroger was also incredible. I loved hearing it all in German.

How did you start out in musical theatre? What do you think is unique about the genre, what makes it special?

LIPPA: I was in a production of "The Pajama Game" in high school and was hooked. I started writing musicals in college at the University of Michigan (Go Blue!). I love musicals because I think they speak directly and clearly to audiences. They incorporate music and dance and story and text and can use them all to tell a compelling story. (Opera does this but the music is often more complex and, therefore, more difficult for a larger, general audience to comprehend.)

What’s your favorite musical from the past twenty-five years?

LIPPA: Besides my own?!? I adored "The Light in the Piazza" with a score by the incredibly gifted Adam Guettel. Benjamin Scheuer's one-man musical "The Lion" is a new favorite.

What’s your next project?

LIPPA: "The Man In The Ceiling". It's based on a novel of the same title by Jules Feiffer about a boy who wants to be a cartoonist, his objectionable father, and his uncle who teaches him how to succeed and fail with grace.

The “Songwriters in Concert” performance following the week of songwriting is sure to feature some of the next generation of songwriters across many genres. With the input of such established artists as Andrew Lippa, the work is certain to be worth a listen.

“Songwriters in Concert,” the culmination of the 2015 Johnny Mercer Project, will take place 8 p.m. Saturday, June 27, at the Josephine Louis Theater, 20 Arts Circle Drive in Evanston.