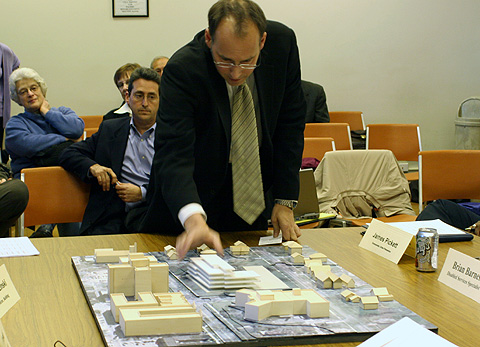 The Methodist Pension Board unveiled plans today to build a new four-story headquarters building on the site of its current offices at 1200 Davis St.

The Methodist Pension Board unveiled plans today to build a new four-story headquarters building on the site of its current offices at 1200 Davis St.

An architect for the pension board points to a model of the new building. The camera’s view is looking southwest with the buildings just east of Ridge Avenue at the left edge of the model.

The board, formally known as the General Board of Pension and Health Benefits of the United Methodist Church, had considered leaving town for over a year, reportedly exploring options in Glenview and Downers Grove, but has decided to keep its roughly 300 jobs in Evanston.

The proposed new building would have 100,000 square feet of office space and parking for 230 cars. Most of the parking would be underground. The board’s existing building was constructed in 1961. Its limited parking space was one of the factors that led the board to consider relocating.

Pension Board representatives told the city’s Site Plan and Appearance Review Committee they have already met twice with neighbors, who urged them to keep the new building away from Asbury Avenue, and keep the density closer to Davis Street and Ridge Avenue.

The plans generally preserve the park land located at the south end of the block, although City Manager Julia Carroll said the city is considering swapping one parcel it owns for one the same size that is owned by the pension board to facilitate the new project.

Daniel Weinbach, the project’s landscape architect, said the board plans to fully plant a band around the building 25 to 30 feet wide with ground cover, perennials and ornamental trees.

City officials at the meeting said a proposal in the plan for a driveway off Asbury to be used by delivery trucks wouldn’t work — because only light trucks are permitted on that street. But otherwise the plans came in for little criticism.

The pension board representatives said they hope to submit the proposal for review by the Plan Commission early next year.

They said they have not yet determined what materials will be used on the exterior of the building, except that roughly 50 percent will be glass to provide light for the offices.

In response to a question, they said the board hopes to design the building to achieve environmental certification, but that they haven’t determined the cost of such measures yet.

The pension board also owns the former Rotary International headquarters building on the northwest side of the Davis-Ridge intersection. Evanston Community Development Director James Wolinski said he expects the pension board will consider selling that building after using it to house all its workers during construction of the new building.

The Chamber of Commerce reports the pension board is the 12th largest employer in Evanston. It was ranked by Crain’s Chicago Business in 2004 as the seventh largest pension fund in Illinois with nearly $11.6 billion in assets. It manages retirement funds for Methodist ministers and lay workers.